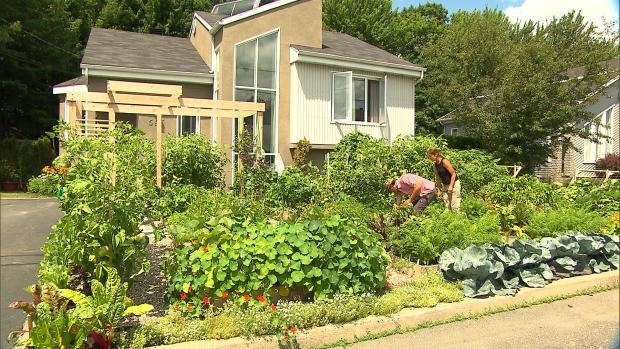 Note from Storm: One of the great human health and environmental horrors of the modern world is the perverted practice of growing useless lawns–rather than food–on one’s land. Most sociologists attribute this to a desire on the part of ordinary people to be aristocrats. The lawn was invented by royalty as a way to give their guards a clear field of fire during peasant revolts. Today, American lawns use between 30 to 40 million acres of precious land. Mowing them creates 5% of U.S. air pollution, with that percentage being significantly higher in urban areas. 17 million gallons of fuel are spilled every year while refilling of lawn equipment—more than what the Exxon Valdez spilled.

We waste billions of dollars annually on lawn maintenance. Most lawns use 10 times the pesticides and fertilizers per square foot on their lawns as farmers do on crops. What’s more, most of those toxic chemicals go to waste, washed into local streams, rivers, and estuaries by the rain. In these times of increasingly-common droughts, between 30% to 60% of the fresh water in cities is wasted on lawns.

Purely on a cost-per-pound basis, urban farming can’t compete with rural farming on an economic basis. But, add in the myriad fringe benefits: fresher, healthier produce; psychological satisfaction; educating children as to where food comes from; neighborhood beautification; reduced urban toxicity; reduced water waste, etc., and it’s one of the most powerful revitalization trends on the planet.

From the article: A couple is fighting to keep a vegetable garden they grow on their property in Drummondville, Québec, 100 kilometres northeast of Montreal.

This spring, Michel Beauchamp and his wife, Josée Landry, planted an elaborate vegetable garden on the front lawn of their Richelieu Street home.

They used to have flowers growing, but Beauchamp has high blood pressure and wanted to eat healthier. So they planted cucumbers, tomatoes, zucchinis, beets, onions, and brussels sprouts, among other vegetables.

Landry said the garden has had a big impact on her and her husband’s health. “Michel lost 75 lb since March, I lost 25 lb,” she said.

But the couple will face fines if they don’t rip up part of their garden in the next five days, thanks to antiquated city regulations.

UPDATE: In mid-July, 2015, authorities announced that Josée Landry and Michel Beauchamp would be allowed to keep their front yard kitchen garden. The move comes after a successful petition by garden advocate Roger Doiron, which was signed by more than 29,000 people. Moreover, officials say they will enlist the couple to help implement new gardening guidelines.