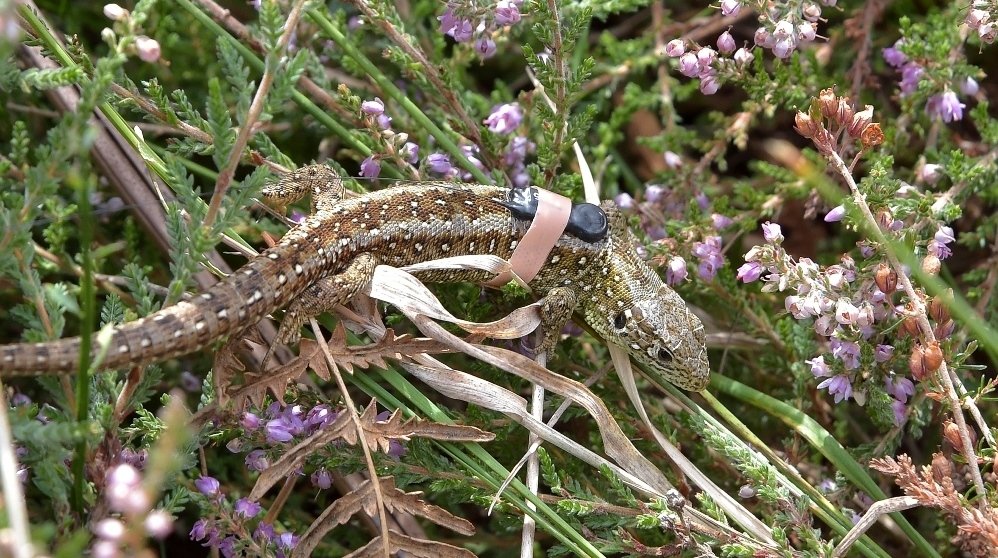 The species restoration team at Marwell Zoo in Winchester, England has fitted transmitters to 24 out of 86 sand lizards released at Eelmoor Marsh Site of Special Scientific Interest at Farnborough to help understand the behavior of these colorful but otherwise elusive animals. 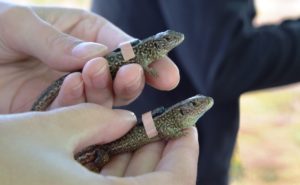 At just 0.29 grams, each tiny tag is less than five per cent of the body weight of a sand lizard, but will allow researchers to detect the location of each animal and provide unique insights into their movements, distribution and habitat use.

It’s the first time radio tracking has been used to monitor reintroduced sand lizards in the UK.

The study is being carried out as part of an initiative to re-establish the species at Eelmoor Marsh and improve knowledge to help wider conservation efforts. Marwell Wildlife and University of Southampton PhD student, Rachel Gardner, said: “Because they blend into the environment and spend time foraging and hiding in dense undergrowth, sand lizards can be incredibly difficult to see. Being able to track them in this way is really exciting – I can’t wait to see how far they go, how quickly, and exactly how they use the habitat.” 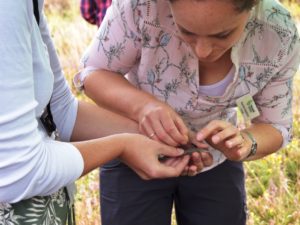 She added: “Having spent the last year rearing the lizards in captivity, it’s wonderful to finally release them into their natural habitat and apply this novel technology to see how they do.”

Despite occurring widely across Europe and Asia, the sand lizard Lacerta agilis is threatened in the north-western part of its range. The species disappeared from much of its former habitat in England and Wales due to habitat loss and degradation, but is recovering following concerted conservation efforts.

Radio tracking has become an established technique for studying movements of wild animals. The technology has now shrunk to enable use with small bodied animals like sand lizards. Radio tags are attached to the lizards using veterinary surgical glue and a small strip of surgical tape with the aerial antenna running along the animal’s back. The tags fall off after a short period of time or when the lizard sheds its skin.

The heathland site, owned by QinetiQ and managed by Marwell Wildlife, has been restored to favorable condition following more than 20 years of targeted habitat management. Stephanie Tudgey, Environmental Advisor, QinetiQ, said: “We are delighted to continue supporting this important conservation program with Marwell Wildlife and we look forward to learning more about sand lizard behavior and the distribution of the released individuals on Eelmoor Marsh SSSI.” 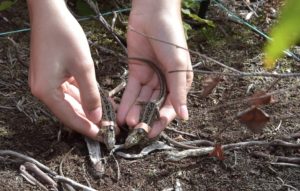 Now in its second year, the project at Eelmoor Marsh will see a total of around 250 sand lizards released into their natural heathland habitat. In partnership with the Amphibian and Reptile Conservation Trust and Natural England, Marwell Zoo has contributed nearly 2,000 sand lizards for reintroduction on heathland and sand dune sites across the South of England over the last 25 years.

However, because sand lizards are unable to recolonize suitable habitat on their own, they will continue to be dependent on conservation translocations, including reintroduction from captive breeding for the foreseeable future.

Marwell Zoo is owned by Marwell Wildlife, a world renowned, action-oriented non-profit conservation and restoration program in the UK and Africa.

Marwell Zoo has launched a fundraising campaign to refresh and increase the size of its facilities for breeding, studying and reintroducing sand lizards at the zoo in order to restore healthy. resilient populations of this rare species.