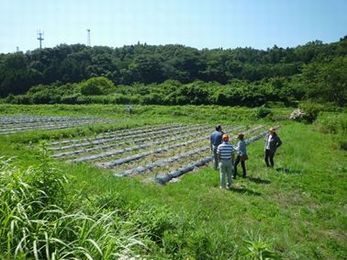 The Tohoku Region, which was heavily impacted by the 2011 earthquake and Fukushima nuclear plant explosion, had already been experiencing a number of social problems, including depopulation, rising average age of citizens and hollowing out of industry, even before the earthquake.

Using reconstruction of the disaster-stricken areas as an opportunity, the Reconstruction Agency of Japan has been working to overcome these problems and create a “New Tohoku” to serve as a model for other regions in Japan and the world. The New Tohoku Model Pilot Project mentioned above is one of the agency’s initiatives.

This project is expected to help various stakeholders develop their own initiatives actively, leading to Tohoku’s sustained vitalization. It aims to select and nurture pioneering initiatives from a wide variety of players, including companies, universities and non-profit organizations (NPOs), and expand these initiatives in the affected areas.

An exchange event called the “8th Kurumaza (meaning ‘sit in a circle’) in Hirono Town” was held on July 10 and 11, 2015. The Yui-Yui Project, launched by JKSK Empowering Women Empowering Society (a certified non-profit organization), has been holding this event regularly since July 2011 to support victims of the 2011 earthquake. It provides a platform for exchanging of views between female leaders continuing active efforts for the future of areas undergoing reconstruction and female experts in the Greater Tokyo Area aspiring to support reconstruction. Together, they hold discussions and consider launching specific actions.

At the latest kurumaza, local citizens and visitors from the Tokyo area toured the local resources in the town. Then they conducted a workshop to exchange ideas on how to use these resources to help make the town more attractive.

The Hirono Wai-Wai Project aims to create sources of “liveliness and livelihood (jobs)” in Hirono by connecting new local initiatives with each other. Such initiatives include renovating the Futatsunuma multi-purpose park, developing a disaster-prevention green space, reopening the mandarin orchard, and cultivating olives and organic cotton.

In cooperation with Iwaki, Fukushima Prefecture; Tokyo area groups; and the Tomioka Civil Engineering Office in Fukushima Prefecture, Hirono is playing a central role in promoting the return of local citizens and in rebuilding Naraha and Tomioka, to which citizens are expected to start returning home soon, in an effort to accelerate the reconstruction of the eight towns and villages of Futaba District.