Every year at the Rainforest Alliance annual gala, they recognize the outstanding achievements made by individuals and companies in sustainable agriculture, forestry and tourism around the world.

This year, two of their honorees could be better described as regenerative agriculture, rather than merely sustainable. 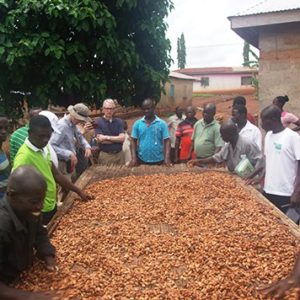 Demonstrating the maxim that there is strength in numbers, the cocoa farmers of the Juaboso and Bia districts in Western Ghana have harnessed that strength by coming together to transform an entire landscape. The members of 34 communities, covering 2.9 million hectares, established a landscape management board (LMB) to oversee the planning, implementation, and monitoring of sustainable practices on their cocoa farms, and the impacts have been nothing short of remarkable.

More than 2,200 cocoa farmers in the area have earned Rainforest Alliance certification, and the LMB has offered climate-change education to help them learn how to make their farms more resilient. Collectively, these producers have been able to protect High Value Conservation Areas in 10 communities—safeguarding precious biodiversity in a region where forests are facing conversion to farmland and other threats—and boosted their carbon stocks by planting 58,600 tree seedlings in areas that were previously degraded.

The economic impact of their hard work has been just as impressive. In five years, they have been able to increase their cocoa yields from an average of 250 kilograms per hectare to 800 kilograms per hectare, and they are enjoying price premiums to boot. Plus, they’ve diversified their income streams by establishing other forest enterprises, such as beekeeping operations and the rearing of small livestock (such as the grasscutter) for meat. Not only do these activities generate money that gets farmers through the lean times between seasonal cocoa harvests, but they’ve also helped other members of the community—creating work for local carpenters who were tasked with constructing beehives and other equipment.

These improvements require more than just time and effort. They also take financial investment, and it’s significant that these communities have been able to mobilize their own funds to achieve their goals. The LMB is becoming an institution that can stand on its own, illustrating another important facet of sustainability—one that allows these communities to continue to build on the progress they’ve already made. 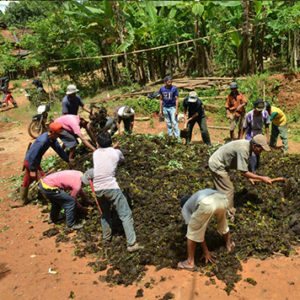 There are two types of people in the world: those who follow and those who lead. The way you respond to a crisis is one way to determine which type you are, and by this standard, the coffee farmers of Kramat Jati have proven themselves to be leaders indeed.

Near their village in the Lampung area of southern Indonesia, there was a small river that used to drain into a reservoir—a resource used for irrigation and electricity. Many years ago, these farmers began cutting down trees along the river to obtain the wood they needed to build their homes, and they also began planting food crops along the steeply sloped riverbanks and nearby hills.

Little by little, the soil lost its ability to retain moisture, and the stream began to dry up. After 20 years, the soil was no longer fertile, and the area became covered with flammable weeds and bushes, making it extremely vulnerable to fires during the dry season. These fires only exacerbated the problem until eventually the stream was transformed into a dry riverbed, and the community lost an important source of water.

That’s when these farmers took action. Banding together, they created a reforestation project in 2000, establishing tree nurseries and planting trees in the deforested area between the naturally regenerating plants. Thanks to their initiative and hard work, they reforested 200 hectares with protective species, timber wood, fruit trees, and rubber. The stream now runs with fresh water again, and the soil structure has been improved by the presence of organic matter. Furthermore, the trees they planted are producing durian, purple mangosteen, and other high-value fruit, which generate additional income for the community.

United under the name of Tunas Karya II farm group, these coffee farmers continue to be responsible stewards of their natural resources, participating in Rainforest Alliance training through the Nescafé Plan and IDH (The Sustainable Trade Initiative) project, and applying what they’ve learned on their farms—including halting the use of herbicides and producing more compost than before. Their many achievements serve a shining example to other farmers in the region.