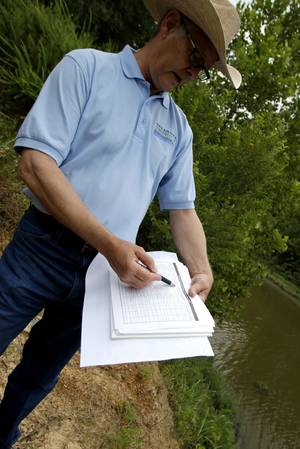 The mine sites typically don’t look dangerous, and sometimes people can’t see them, which makes them more of a hazard. Since 1972, 25 people have died at abandoned mine sites in Oklahoma, according to reclamation program reports.

Because of the danger posed by the abandoned mine land in Muskogee County, the program’s first priority is to complete the project to reclaim the land.

With the reauthorization process coming up, the mine reclamation program is pushing for legislators to approve an expedited process so mine land can be reclaimed more quickly.

Since the program began, it has reclaimed 4,834 acres of mine land, according to the program’s reports. However, about $100 million of high priority sites have yet to be reclaimed.

Before reclamation, abandoned mine areas aren’t typically useful to landowners.

Virle Pryor, whose family has owned the land along the Muskogee County bus route for about 35 years, said the mine land would make good pasture if it were reclaimed. He even might be able to plant wheat on it.