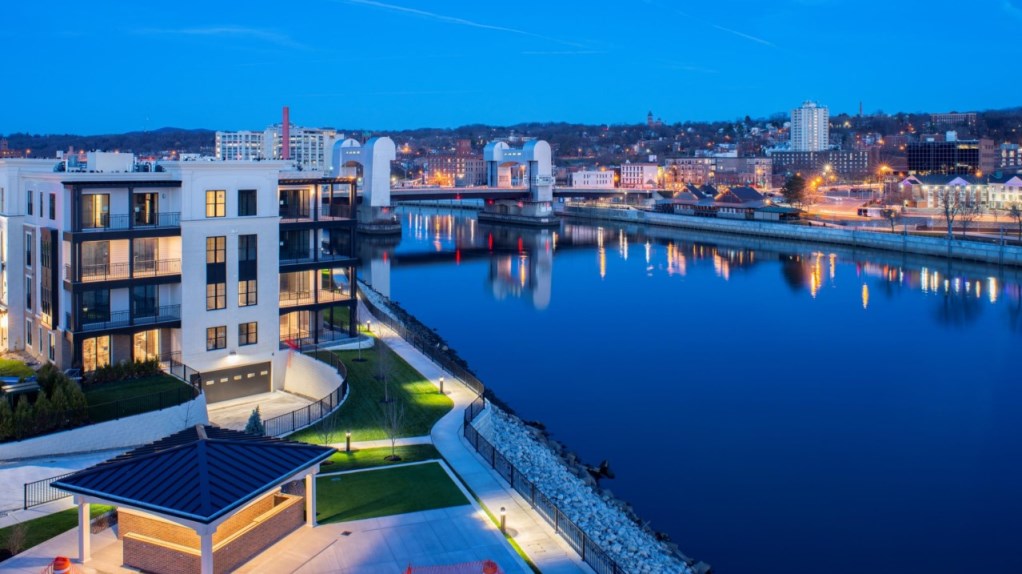 November 24, 2021 saw the completion of the Starbuck Island redevelopment project, a $65 million investment that repurposed, renewed & reconnected (the reliable 3Re strategy for revitalization) more than 11 acres of contaminated oil storage brownfield into a high-density, vibrant waterfront community in the Village of Green Island, Albany County, New York.

Construction began in November of 2018 upon approval of plans to clean up the site under the Department of Environmental Conservation (DEC)’s Brownfield Cleanup Program.

Starbuck Island, prior to remediation and redevelopment.

“DEC’s Brownfield Cleanup Program and the State’s Regional Economic Development Council are working together in Green Island and other communities along the Hudson River and across the state to create jobs and opportunities while protecting the environment and public health,” he added.

Starbuck Island connects Green Island to downtown Troy, and is now home to nearly 270 residential units, a salon, a restaurant and parking.

Green Island Mayor Ellen M. McNulty-Ryan said, “In my almost 20 years as Mayor of the Village of Green Island, I have to say that the development of Starbuck Island has been the most transformative change to our community. Peter Luizzi made a very brave move two years ago to purchase and remediate this property and turn it into the premier waterfront location in the Capital District. I am grateful for his vision and commitment to this project. I am also grateful to everyone who helped make this a reality, from those in New York State and County government, to our local government. It just goes to show you what can be accomplished when we all work together.”

A comprehensive cleanup under DEC oversight included soil removal and groundwater treatment conducted on a parallel track with the redevelopment to help transform this former petroleum storage and distribution terminal into a riverfront economic asset.

ESD Acting Commissioner and President and CEO-designate Hope Knight said, “Creating access to our waterfronts, and breathing new life to blighted former brownfields are transformational steps in revitalizing communities around New York State. Strategic investments in mixed-use projects like Starbuck Island reflects our commitment to placemaking as a pillar of long-term and sustainable economic growth.”

In Round VII of the Regional Council initiative, Starbuck Island was designated a priority project for the Capital Region Economic Development Council and was awarded a nearly $1.8 million Empire State Development grant.

Peter Luizzi, Jr., owner of Luizzi Companies, said, “It was a long road to here, but Luizzi Companies and I extend our thanks to the Village of Green Island, NYSDEC, Empire State Development, M&T Bank, BBL Construction Services, and the rest of the design and construction team. Without these parties, this project wouldn’t have been able to come to fruition.”

In addition to the apartments, commercial space and parking, Starbuck Island has a 31-boat slip marina that includes rental slips, an amphitheater and promenade open to the community, and pedestrian connections that encompass the entire island. These public-use elements, plus the construction of a stone seawall for protection, were supported by the ESD grant.

“The transformation of Starbuck Island into a new engaging waterfront neighborhood is a testament to the state’s brownfield cleanup program and economic development incentives,” Governor kathy Hochul said. “With the project now complete, residents and visitors to the newest community on the Hudson River can enjoy the many amenities, spectacular views, and local businesses, spurring additional investments to the region.”

Located just over the Green Island Bridge, Starbuck Island is a short walk to Downtown Troy’s many restaurants, shops and entertainment; minutes away from Sage College and Rensselaer Polytechnic Institute; and an easy commute to neighboring hub cities and towns.

CREDC Co-Chairs Ruth Mahoney, NBT Bank President of Wealth Management, and Dr. Havidán Rodriguez, University at Albany President, said, “The redevelopment of Starbuck Island is a great example of the Regional Council process at work. By recommending State funding for this priority project, the Council recognized the significance and potential for this development to generate a lasting effect on the region, and we offer our congratulations to Luizzi Companies for building a truly spectacular urban community.”

The Starbuck Island project complements the region’s economic development strategies by promoting the adaptive reuse of a once blighted and abandoned property, and creating a vibrant, engaging communities that catalyze new investments and welcome new residents.

Assembly Member John T. McDonald III said, “Congratulations to Mayor Ellen McNulty-Ryan and the Green Island team for the great work to transform this once long forgotten oil storage facility, laden with brownfield contamination, into a whole new residential and commercial community now known as Starbuck Island. I am pleased to join Governor Hochul as once again state resources were strategically invested to address shoreline issues, but more importantly to clean up this forgotten wasteland for a better use – not only for Green Island, but also the Capital Region. Starbuck Island is a shining example of how Brownfield Tax credits along with a private developer such as Peter Luizzi can work with the community for the benefit of all.”

The Starbuck name dates back to the 19th century, when Nathaniel and George Starbuck opened an iron foundry on the island in 1821.

Albany County Executive Daniel P. McCoy said, “The transformation of Starbuck Island into a first-class waterfront community was well worth the effort. We now have a destination that provides unique residential opportunities while also attracting visitors with exciting new shops and restaurants. The completed project is a success story that will benefit the entire region.”

Initially, Starbuck Brothers Foundry manufactured cast iron stoves before expanding production and services. In the early 20th century, the site was cleared and served as an oil terminal until 2008.

Senator Neil Breslin said, “The Starbuck Island redevelopment project is truly the beautiful centerpiece of the collaborative effort between Luizzi Companies and New York State to revitalize this waterfront property. This connective project has breathed new life into a once-blighted area island, transforming it into a place where people are excited to live and work. I am grateful to Governor Hochul for her dedication to creating economic opportunity, and for the investments by Empire State Development and the Department of Environmental Conservation to support the future of the Capital Region.”

With plans to further develop the area, Luizzi Companies purchased the abandoned and contaminated land in 2017 with a vision to tackle 200 years of industrial pollution and to develop a resort-style community with easy access to Green Island’s thriving town center and downtown Troy.