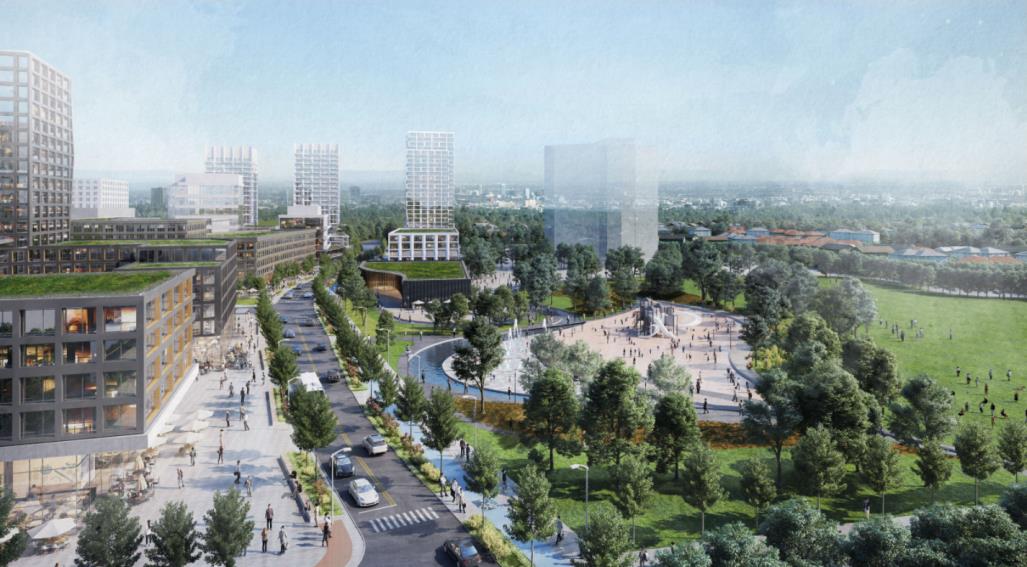 The vision for the master plan begins with a resilient landscape design that lifts away the 53-acre asphalt parking lot and shopping mall, and reconnects the land with Brampton’s surrounding creeks and rivers. In other words, it’s a perfect example of the world’s most successful revitalization strategy at work…the 3Re Strategy: repurpose, renew, reconnect. 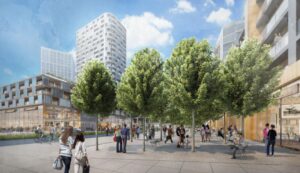 Looking beyond the boundaries of the site, the designers took inspiration from Brampton’s natural ecology to guide the identity of the new mixed-use development, restitching it to two watersheds that surround the site, from Etobicoke Creek to Fletchers Creek, and Oak Ridge Moraine to Lake Ontario.

In line with the City of Brampton’s growth priorities as one of Canada’s fastest growing cities, the site will be redeveloped by its current owners, RioCan Real Estate Investment Trust, into a sustainable, highly walkable, transit-oriented city destination.

Many of the mall conversion projects you see here in REVITALIZATION involve repurposing the site of a deal shopping center. In this case, the mall is still economically viable, but—as with most malls—it’s a single-use development that’s relatively isolated from the community. This project hopes to make the site more of a real neighborhood; one that’s more integrated with the city as a whole.

In response to REVITALIZATION’S inquiry as to how much—if any—of the mall will be demolished by this project, RioCan provided this insight: “RioCan is working closely with the city of Brampton, our tenants and the Shoppers World Brampton community. The revitalization of Shoppers World Brampton is a long-term development. The first phase of the development will not require demolition of the existing centre and as we move closer to subsequent phases we will carefully consider what portions of the mall will be replaced with new retail space, ensuring the community and our tenants continue to be served.”

A mix of high-density and low-density buildings will house over 4500 new residential units, approximately 860,000 sq. ft. of retail and commercial space, alongside expanded and revitalized community spaces. SvN and BDP Quadrangle looked outside the boundaries of the site to see what the land conveyed about its identity, using it as a key driver for the design of this new vibrant mixed-use community. 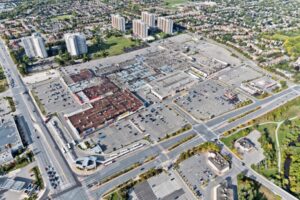 “The transformation of the existing Shoppers World site started with the idea that landscape – while seemingly absent today – can become one of the most defining characteristics of a site,” says Shonda Wang, Principal, SvN Architects + Planners.

“We find more and more, especially in these hardscaped environments, that going back to the land is what brings a true sense of place to a community. Architecture – in terms of new styles, façades, materials and building technologies – will change over time. As designers, leading with a landscape framework ensures a consistent vision that can be maintained during the many years of the site’s redevelopment. It’s the common thread that will tie all the different pieces of the built environment together,” she added.

The design for the master plan includes a landscape architecture strategy by SvN along new streets that will articulate the theme of the original ecology, including rivers, wetlands, meadows and ponds. Woven throughout the community are a series of courtyards, pocket parks, green roofs, terraces and an urban bosque where people can gather for markets and pop-up events. As the lead architect and prime consultant, BDP Quadrangle worked alongside SvN in developing the landscape vision for the site.

New streets and pedestrian promenades enhance connectivity within the vibrant mixed-use community and stitch it back to the adjacent Kaneff Park and Fletchers Creek to the west, Etobicoke Creek to the east, and residential neighborhoods to the south and north. As a gateway transit site that connects Brampton to the neighboring city of Mississauga, there will also be a new a transit plaza, linear park, and retail high street, as well as 7.5 acres of dedicated land for an urban community hub, expanding the existing and underutilized Kaneff Park to a dynamic facility comprising recreational spaces, park space, and elementary school and other community uses. 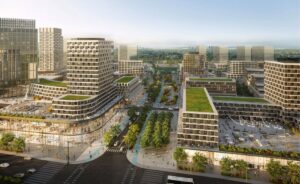 Building on work SvN has designed and implemented in other cities, and through ongoing engagement with the City of Brampton, SvN is leading the way for a resilient landscaping strategy that will set new precedents for the wider City of Brampton. Opportunities such as integrated stormwater management, using greenery to reduce urban heat island effects, urban design that decreases reliance on private cars, renewable energy, and sustainable building technologies, will all be integrated within the traditional street design for this new community.

“The redevelopment of Shoppers World Brampton provides an unmatched opportunity for us to transform the site into a new community that is not only resilient to climate hazards, but also greener, healthier, and has a smaller environmental footprint,” says Wang.

Through a highly collaborative approach and shared vision between the city, design and development teams, as well as extensive community engagements, the Shoppers World Brampton rezoning application was approved with overwhelming support in late 2020. RioCan is currently working with the City of Brampton on concurrent draft plan, site plan, and consent applications. Anticipated completion date for the entire new community build is 2040.