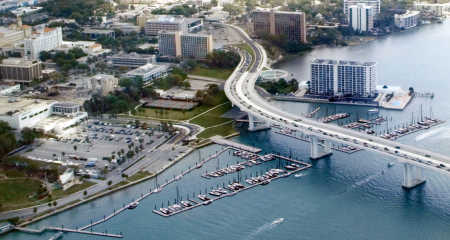 Consultants unveiled ambitious plans to reactivate Clearwater, Florida’s downtown waterfront and bluff, and spur revitalization at a pair of public presentations on November 29 and 30, 2016.

Michael Delk, the city’s planning and development director, says the project, Imagine Clearwater, “is a game-changer” for the community. Plans call for the city to follow in the footsteps of nearby Tampa and St. Petersburg by shifting its focus to its local waterfront as a way to reinvigorate the downtown economy.

Clearwater’s waterfront area, which includes around 50 acres, runs from Drew Street north to Court Street and from the waterfront west to Osceola Avenue.

“Historically, there was a period of time where cities almost had their backs to their waterfronts,” Delk says. “Now we want to activate and interact with our waterfront. It’s been a natural progression for us, and Clearwater needs a better connection with its waterfront. We have one of the most beautiful, spectacular waterfronts in the region, but we don’t take as much advantage of that as we should. This plan really connects downtown with the waterfront, and it should improve the economics of downtown.”