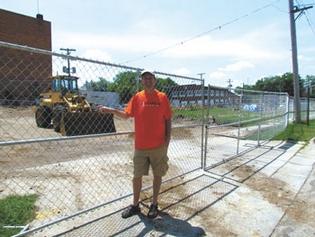 In the summer of 2012, Jeremy Gump, of Inquire Partners, proposed revitalization of John and North streets in Sturgis, Michigan.

He had immediate city support and interest in the office and retail spaces he would provide after removing the former Moose Lodge and a small apartment house.

Gump’s vision for the area generated interest and excitement, but the path has been longer and more complicated than he initially anticipated.

Due to lending limits, smaller local banks couldn’t or wouldn’t lend Gump the $4.65 million needed for the building. Larger banks weren’t interested in such a small project, Gump said.

However, Gump needed additional money because the appraised value of the building would be $3.55 million — $1.1 million less than the cost.

So Gump worked for and was awarded a community revitalization grant through the Michigan Economic Development Authority. It also required his personal contribution.

Then there was the street scape issue. Gump’s initial requirements with the city included burying power lines and he needed larger water mains for the building’s fire suppression system. After all that, sidewalks and streets must be replaced.

That funding came through brownfield redevelopment. The buildings removed from John Street were functionally obsolete, which is a brownfield qualification.

When Gene Harrison started working toward bringing Wings Etc. downtown, the streetscape plans went back to the drawing board, Gump said. “When people see the building they will say, ‘Wow, that’s really nice,’” Gump said.

But more amazing will be the revitalization of John Street, North Street and the north city downtown parking lot behind Wings Etc., he said.