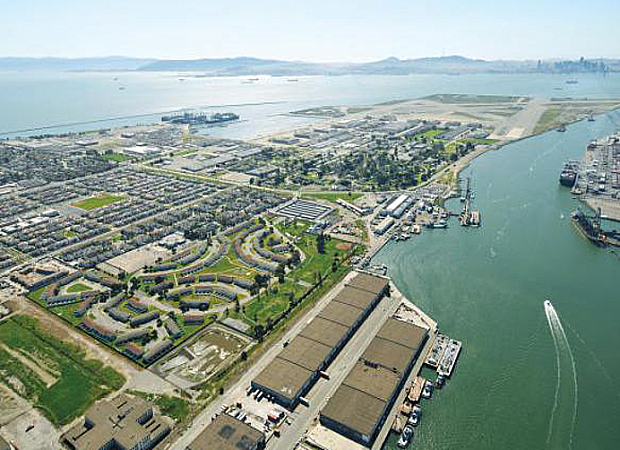 Note from Storm: Yes, I know we had an article about this project in the last issue. But this is a hugely important effort that’s been a long time coming, so I’m tracking and documenting its progress. That last article was about approval of the project: this one is about the beginning of actual work (not that getting this designed and approved didn’t take a lot of work!).

From the article: After two failed attempts in the past, as of July 2015, the $500 million redevelopment of the abandoned Alameda Naval Air Station–closed since 1997–is finally underway. It should re-energize a local economy that was devastated when it lost the 18,000 jobs the base provided when open.

Located in the heart of the San Francisco Bay Area on the island city of Alameda, Alameda Point is a neighborhood in transition. Creative reuse of military buildings and plans for new construction are in progress.

Offering panoramic views of the San Francisco skyline, Alameda Point is home to historic buildings, important wildlife habitat, and a unique shoreline and open space landscape on the Bay.

The City of Alameda took title to about 1,400 acres of land and water from the U.S. Navy on June 4, 2013. It is the first, and largest, phase of land transfer to the city since the Naval Air Station shut down in 1997.

The U.S. Department of Veterans Affairs (VA) took title to 624 acres of land from the Navy at a ceremony on November 3, 2014. The VA will construct an outpatient clinic and columbarium on 112 acres, with the remaining 512 acres remaining undeveloped.

A development partnership plans to invest up to $500 million to start the remake of the first 68 acres of the former Naval Air Station into a signature neighborhood intended to help attract 8,000 new jobs to the island city.

The plans envision retaining a portion of the air station’s World War II-era buildings for commercial space with an eye on increasing the number of small-scale manufacturing, retailing and artisan-based businesses that the area already supports and adding up to 800 homes.