What are cities doing with their fast-growing inventories of dead big-box stores, dead shopping centers, and dead malls? Some are feeling sorry for themselves, and are simply waiting for a private developer to save them.

Others are actively strategizing about how these “greyfield” properties can be repurposed and renewed, often in ways that reconnect and revitalize their neighborhoods (AKA: the 3Re Strategy). This approach often involves redesigning them to be pedestrian friendly and mixed-use, rather than automobile-dependent and single use (retail). In locations that don’t make sense for pedestrian traffic, some communities are taking advantage of their ease of access by car to turn big-box stores into public amenities, like sports complexes.

But let’s get back to that first group: those places that are waiting for a knight in shining armor. Sometimes, this works, especially when the private developer has a strategy for succeeding in a world that’s increasingly dominated by online shopping. The strategy is simplicity itself: sell what Amazon can’t sell.

Brookfield, Wisconsin has a dead Sears store, as do so many other communities. On August 28, 2017, Marcus Theatres, a division of The Marcus Corporation announced it had reached an agreement with CBL & Associates Properties Inc. to build a new BistroPlex dining and movie entertainment concept at Brookfield Square in Brookfield. The 40,000-square-foot building will be attached to the center as part of the future redevelopment of the vacant Sears building.

On December 20, 2017, the Brookfield Common Council approved a $8.75 million public financing plan to help redevelop Brookfield Square’s Sears site. They also approved a separate proposal to sell adjacent land for a hotel. Construction on the new theatre is expected to begin in 2018.

This is a new phase in the mall’s reinvention, adding a movie theater, bowling alley, restaurants and other attractions, transforming it from a retail complex to an entertainment destination. The new projects, including the hotel, will total approximately $60 – $70 million by city estimates.

“BistroPlex is the first key component to our plans for the overall redevelopment of Brookfield Square and we look forward to making additional announcements in the near future. This unique combination of dining and movies will provide an exceptional entertainment option for shoppers and area residents alike,” said Stephen Lebovitz, president and CEO of CBL & Associates Properties, Inc. 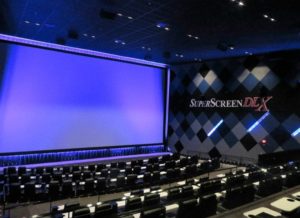 Described as a restaurant that serves movies, the new BistroPlex is slated to include amenities featured in the company’s first BistroPlex, which opened June 30, 2017 at Southridge Mall in Greendale, Wisconsin.

“Brookfield Square is the perfect location for our second BistroPlex. We have long been attracted to this area given its favorable demographics, long-established recognition as a shopping and entertainment destination, ample parking and easy freeway access. Moreover, the parcel is ready made for a development of this type, with no obvious infringements to traffic flow patterns or challenging construction hurdles. This announcement has been long in the works, and we are excited to finally share with the community our vision to bring our newest theatre concept to Brookfield Square,” said Rolando Rodriguez, chairman, president and chief executive officer of Marcus Theatres.

Headquartered in Milwaukee, Wisconsin, the Marcus Corporation focuses on the lodging and entertainment industries. In addition to its Marcus Theatres division, its lodging division, Marcus Hotels & Resorts, owns and/or manages 18 hotels, resorts and other properties in nine states.

Headquartered in Chattanooga, Tennessee, CBL is one of the largest owners and developers of malls and shopping centers in the United States. CBL owns, holds interests in or manages 121 properties, including 78 regional malls/open-air centers. The properties are located in 27 states and total 75.5 million square feet including 6.3 million square feet of non-owned shopping centers managed for third parties.