A 10-year plan to regenerate a declining fishing village in Scotland has won the top prize at a prestigious national awards ceremony last night.

The plan for Stromness—which involved extensive community input—was awarded the Silver Jubilee Cup, at the Royal Town Planning Institute’s Awards for Planning Excellence 2018 held in London on May 25, 2018. It also won in the Excellence in Planning for a Successful Economy category. 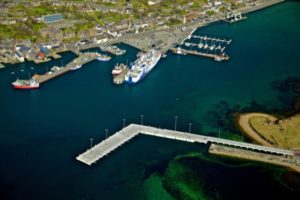 RTPI’s Awards Advisor, Craig McLaren FRTPI said “Stromness has been regenerated over the past 10 years through a comprehensive, plan-led strategy. It was spearheaded by the council’s planners who were key to its success through establishing a vision for the town and ensuring commitment from other players to help deliver it. The before and after photographs show just how dramatic the transformation has been. This remarkable ‘place-based’ approach could be used as a blueprint to revive declining towns across the country.”

Planners at Orkney Islands Council led a whole-of-council task force to implement the 10-year plan that has transformed the declining town following the community warning Stromness was being left behind. Over the past 10 years, the plan has resulted in 12 major projects implemented across the town, including new and upgraded public spaces, new shops and businesses and a new primary school. 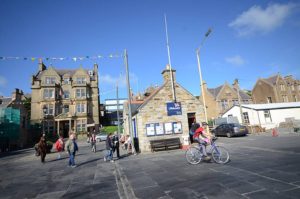 The library was not only rebuilt and moved to a new site – in the centre of the town, at the community’s request – to ensure it was accessible to everyone. A new fishing pier was built with European funding, and new business and industrial spaces were allocated near the pier. The council have also begun work for a new international research facility and infrastructure for tidal and wave energy generation.

All of this resulted from council planners working closely with the community and involving them from the very start, using a ‘blank page approach’ to establish the community’s key priorities. A draft plan was drawn up, which was then shaped by community events, meetings and surveys, plus well attended community workshops.

RTPI’s President, John Acres MRTPI, said: “Congratulations to all the winners and commended entries. This year’s awards have been a true celebration of planners’ passion for creating prosperous places and vibrant communities. Planners and planning make an important contribution to society and these awards highlight outstanding examples of what can be achieved with vision, leadership and expertise.” 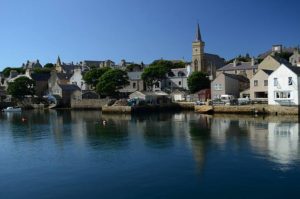 Running for over 40 years, the RTPI Awards for Planning Excellence celebrate exceptional examples of planning and the contribution planners make to society. This year saw a nearly record number of entrants and the judges shortlisted 78 finalists across 13 categories.

The Awards for Planning Excellence are the most established and respected awards in the UK planning industry.

Andrew Jones MRTPI, Practice Leader Design, Planning + Economics at AECOM added: “AECOM is proud to be a headline sponsor once again of the RTPI’s Awards for Planning Excellence. Those recognised tonight illustrate the best of the planning profession and demonstrate the impact we have on quality and delivery in every area of the built environment. On behalf of AECOM I would like to extend our congratulations to all of the commendations and winners.”

All photos of Stromness courtesy of Orkney.com. Featured photo is by Fionn McArthur.