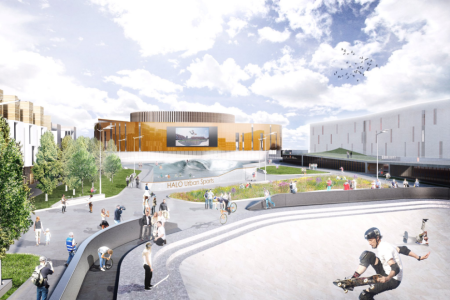 On September 28, 2016, a landmark regeneration plan that could create around 1,000 permanent new jobs on the site of the former Diageo bottling plant in Kilmarnock, Scotland was given the backing of East Ayrshire Council.

The plant was closed five years ago with the loss of 700 jobs, despite a national campaign to keep it open. Diageo said it would gift the site to the HALO urban park project

The HALO Urban Park project, spearheaded by Kilmarnock-based developers Klin Group, will be mainly funded by the private sector. It has already secured financial backing from the site’s owners, Diageo, who pledged £2 million to support the proposed regeneration, and to donate the 23 acres of land (subject to the project’s meeting certain economic and community benefit goals and securing financial backing from central government).

Today, East Ayrshire Council also approved their own £2 million of support for the project.

Klin Group, who were the original visionaries for the Hill Street site and who secured an option to develop the site from Diageo, said the imaginative brownfield regeneration scheme is set to revitalize Kilmarnock and boost the wider economy of Ayrshire.

The plan for the Urban Park is to create a commercial, cultural, leisure and lifestyle quarter for Kilmarnock.

Diageo’s president of global supply, David Cutter, said the drinks giant was “delighted to partner with East Ayrshire Council to support this regeneration proposal. Our ambition has always been to see this site redeveloped to the benefit of the local economy and community. We believe this regeneration plan will create a positive legacy for Kilmarnock and we hope it will gain the necessary support…to make it a reality.”

Image courtesy of the Klin Group