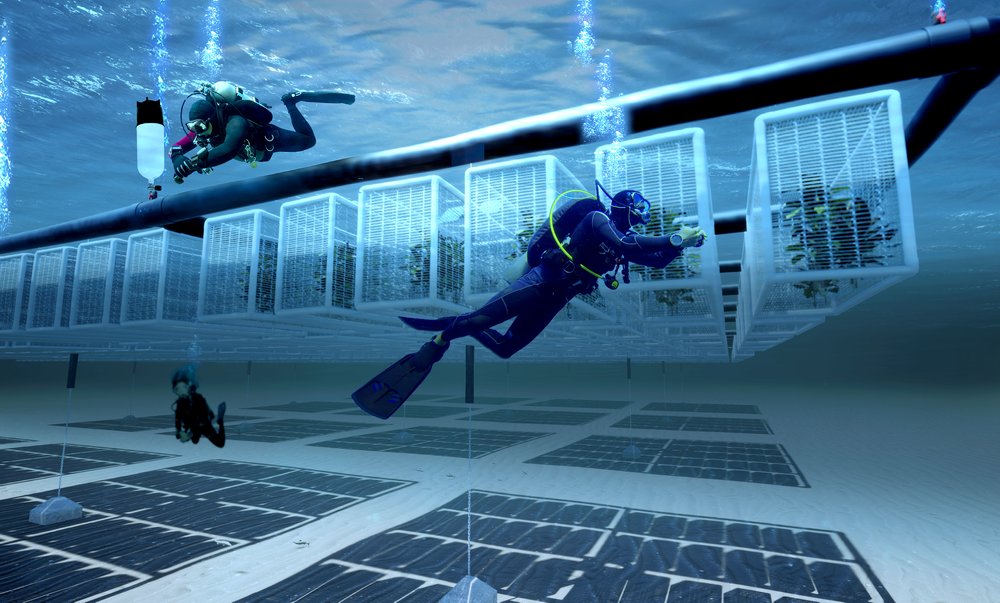 Those who have attended one of my (Storm Cunningham) talks or workshops over the past two decades—or who have read my books—probably know that I’m a huge fan of regenerative aquaculture. This usually involves either filter-feeding shellfish (such as mussels, oysters and clams) or edible seaweeds.

That’s because such crops don’t need to be fed by the farmer: they take ambient nutrients from the water, thus leaving it cleaner with each harvest. This, in turn, helps restore local biodiversity that had been reduced by pollution, and helps regenerate the local fishing economy by boosting the health of fin fish, crustaceans and the like. In the interview below, which was written by Rob Fletcher and originally published on The Fish Site (and is reprinted here by permission)—Phil Cruver, former CEO of Catalina Sea Ranch, explains why he’s now focusing his attentions on producing food-grade seaweed in the Caribbean, using a unique, submersible system.

Can you briefly describe your aquaculture career? It started in 2012 when I founded Catalina Sea Ranch and secured the first offshore aquaculture permit in US Federal waters from the US Army Corps of Engineers. The California Coastal Commission (CCC) has the right to determine if the permit is consistent with the Coastal Zone Act, which took another two years, but remarkably the project received unanimous approval.

I raised about $6 million of capital from accredited investors pursuant to Reg D offerings, another $2 million in debt, $1.2 million in Federal R&D contracts, and about $1 million in grants. We needed another $5 million and I couldn’t raise the requisite institutional capital, as the regulatory costs by the CCC, NOAA and FDA exceeded $500,000 annually, which was unsustainable. As Catalina Sea Ranch was running out of money a shareholder agreed to invest $2.5 million but wanted control so I voluntarily turned over management control in June 2019, as it was the right thing to do.

It got ugly about six months after I departed the CEO’s role, when three factions of large shareholders started fighting. About a year later one of those shareholders forced the company into involuntary bankruptcy.

Coming from a mussel farming background, what made you decide to switch to Eucheuma? 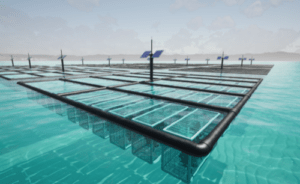 I was retained as a consultant by the Inter-American Development Bank (IADB) to develop a marketing and distribution strategy for seaweed exports from Belize to international markets. The IADB wanted an entrepreneur to create an executable plan, rather than an academic study that typically gets filed away in a drawer. Interestingly, one of the seaweed farms in Belize was a cooperative owned and operated exclusively by women that had received positive publicity because of the recent movement for gender equality. The timing was providential for creating an export market promoting the touchstones of social, gender, and environmental justice, coupled with creating jobs for the country’s economy – which had been reliant on tourism and had suffered after the pandemic.

I had previous experience with seaweed mariculture when serving as a principal investigator for the $25 million Macroalgae Research Inspiring Novel Energy Resources (MARINER) contract, funded by the Department of Energy. That research project was focused on seaweed for biofuels, but Belize’s native seaweed Eucheuma is edible, which presented a new and exciting learning experience for feeding the future.

How much time and investment do you need before you can expect to achieve proof of concept for the new farm? I have created an investment deck and business plan for developing a “Caribbean Seaplant Industry” for the region rather than focus only on Belize. I use “plant” in my terminology as “weed” has a pejorative connotation that will denigrate the positive branding message. It is my conviction that once the 43 million people residing on 7,000 islands in the Caribbean Region have dug themselves out of the pandemic hole, they will need a more diversified economy, that’s not reliant on tourism.

A regional seaplant industry would also provide economies of scale to reduce costs for establishing uniform environmental regulations, marine spatial planning, biosecurity, seedstocks, nursery, etc. Furthermore, a regional processing centre would reduce costs and ensure quality control with a resilient, transparent, and secure distribution supply chain that will be mandatory for meeting emerging rigorous sustainability certifications. I am currently networking with regional development banks and impact funds for a pilot project to de-risk public and private sector investment. Under normal circumstances this would take a year but with the pandemic and disrupted supply chains, I am estimating two years and the cost will depend upon the scope.

What lessons – both positive and negative – have you learned from your time at Catalina Sea Ranch? From a positive perspective, Catalina Sea Ranch was a thrilling experience with enormous potential to scale a put a small dent in our nation’s $16 billion seafood trade deficit. There was tremendous positive press, including a feature article on the front page of the Washington Post, two stories in USA Today, Fast Company, Quartz, and other publications. I was also delighted to shoot and edit over 200 videos documenting the pioneering venture, which are still posted on the website’s Facebook and YouTube channels.

On the negative side, I learned that government bureaucrats won’t budge, even when provided with data-driven science showing that their regulations have no merit. I also learned to “hope for the best” and “plan for the worse” because “stuff” happens. To keep things afloat, I personally lent the company nearly $500,000 with a no interest, unsecured note and now have a large tax loss carry-forward. Can you explain the technology that you’re planning to use and how your system will differ from existing seaplant production methods? In 2010, my company KZO Sea Farms developed a submersible cage for fish farming, with engineering support from the School of Marine Science and Ocean Engineering at the University of New Hampshire and ISCO Industries, the largest high-density polyethylene (HDPE) fabricator and distributor in North America. We recently reconnected to adapt the fish cage technology for offshore seaplant mariculture, introducing unique features that provide protection from hurricanes, produce higher yields, improve quality control, and are capable of scaling as a comprehensive farming system.

I discovered through the IADB consultancy that the global tropical seaplant industry relies on primitive labor-intensive methods for planting, cultivation, harvesting, and processing. Indonesia is the global seaplant leader, producing over 80 percent of the world’s carrageenan. Other producers include the Philippines, South Korea, North Korea, Japan, Malaysia and India. In all these countries seaplants are cultivated using archaic, traditional methodologies including the fixed, off-bottom line method, the floating raft method and basket method. Remarkably, this massive industry has remained artisanal despite explosive growth over the past 20 years.

The global market for seaplant-derived hydrocolloids used in a wide range of food additive and commercial chemical applications is valued at over $1 billion annually. The Caribbean cannot initially compete with the intensively cultivated, massive seaplant farms in Asia that have most of their harvests processed in China for the pharmaceutical and cosmetic industries. Therefore, we believe the initial target market for the Caribbean should be high-value exports of sustainable seaplant products for human consumption. Thus, there is a major opportunity to disrupt Asia’s archaic billion-dollar tropical carrageenan industry and introduce a new seaplant industry to the Caribbean for exporting nutritious and sustainable food products.

What sort of reception have you had from (a) investors (b) local stakeholders? The reception from prospective investors and stakeholders can be summarised by two words: ambitious and awesome. However, it is too early for private sector investment, so the public sector must step-up to make this ambitious venture awesome for improving the Caribbean economy.

There is a potential market for regenerative and healthy seaplants harvested from pristine Caribbean Ocean waters branded as superfood for the global $168 billion dietary and supplement industry. Seaplants have 92 of the 102 essential minerals required for strengthening human immune systems for combating Covid-19 and other inflammatory diseases. A superfood brand would also be appealing to the emerging market of eco-conscious and humane consumers seeking alternatives to unsustainable protein produced in polluting animal factories.

Seaplants are a zero-input food that don’t need fresh water, feed, fertilisers or land, and can be grown over massive ocean areas. Furthermore, seaplants can double their biomass within two weeks, sequestering massive amounts of CO2 as a nature-based solution for helping to decarbonise our planet. This branding message is compelling for impact investments by thousands of individuals, corporations, and nations seeking to meet their decarbonisation pledges.

Other than funding, what do you think are the key challenges you need to overcome to establish and successfully operate a seaplant industry in the Caribbean? The Caribbean is facing significant effects of climate change, like all regions across the globe. With rising temperatures, seaplant crops may become more susceptible to disease and epiphyte growth. The lack of genetic diversity and climate change may reduce seaplant yield unless there is a research programme for developing better strains that are more tolerant to temperature and other environmental changes.

Concurrent with the proposed pilot project operations, we intend to collaborate with Caribbean regional stakeholders to identify the most appropriate ocean areas for developing offshore seaplant mariculture. This task will include prospecting sites with minimal expenses for both farming operations and transportation of seaplant product for processing and exports. We also believe the future for a Caribbean Seaplant Industry will be moving farming operations offshore to deeper waters, not conflicting with coral reef ecology, ocean tourism, vessel traffic or the fisheries industry. Moreover, offshore mariculture will mitigate theft and vandalism, which will be a significant risk factor in a slowly recovering economy.

Most importantly, prospective investors are not interested unless the farm infrastructure is protected from storms, typhoons and hurricanes. To overcome this risk, with a few days’ notice, the HDPE pipes can be filled with seawater, allowing the farming structure to be lowered to where there is an exponential decrease in ocean energy from winds and currents caused by storms. Using compressed air from scuba tanks, the structure can be resurfaced for deployment in the optimum ocean depth.

How do you see KZO developing over the next decade? I envision our competitive advantage as a “first mover” in a billion-dollar industry deploying a economically competitive and comprehensive seaplant farming system providing four transformative benefits:

Do you still have hope that the US will develop a meaningful offshore aquaculture sector any time soon? I do have hope following the recent disruptions in the supply chain with China, from where the United States imports most of its seafood, contributing to its multi-billion-dollar trade deficit. Americans are awakening from the nightmare of not having a domestic source of healthy seafood and reliant on undocumented seafood products cultivated in questionable waters. Moreover, the existential crisis of global climate change will provide more scientific data to help mitigate over-regulation of sustainable mariculture for feeding the future and decarbonizing our planet.