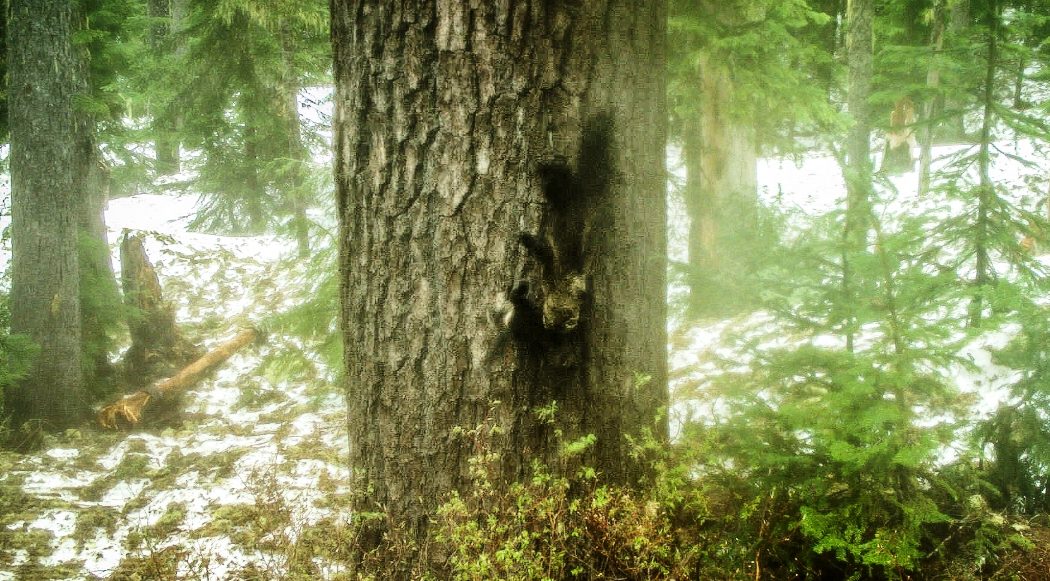 The fisher (Pekania pennanti) is a small carnivorous mammal native to North America. It is a member of the mustelid family, commonly referred to as the weasel family. The fisher is closely related to but larger than the American marten (Martes americana).

The fisher is a forest-dwelling creature whose range covers much of the boreal forest in Canada to the northern United States. Names derived from aboriginal languages include pekan, pequam, wejack, and woolang. The English name doesn’t make much sense: It is often called a fisher cat, but it’s not a feline. And, despite the name “fisher”, it isn’t know to eat fish. 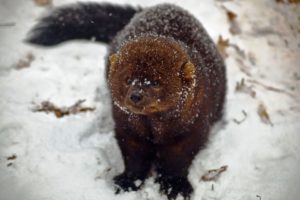 Fisher in winter coat by ForestWander.com via Wikipedia.

Fishers have few predators besides humans. They have been trapped since the 18th century for their fur. Their pelts were in such demand that they were extirpated from several parts of the United States in the early part of the 20th century. Conservation and protection measures have allowed the species to rebound, but their current range is still reduced from its historic limits.

Now, reintroduction and restoration efforts are bolstering those conservation efforts, which failed to halt its decline. On June 1, 2017, a trail camera hidden in the South Cascades forests of Washington gave officials what they believe to be the first glimpse of a fisher born in the area since reintroduction efforts began two years ago.

“She is hopefully the first of many female fishers we photograph attending a den site and caring for kits in the South Cascades,” said Jeff Lewis, a wildlife biologist with the Washington Department of Fish and Wildlife (WDFW).

Grainy images of a young female fisher with her kit provide the first evidence that this rare forest carnivore is reproducing in the South Cascades, where state, federal and non-profit organizations are working to reintroduce them.

The pictures show a female fisher in the Gifford Pinchot National Forest coming down her den tree headfirst, carrying a large kit. The adult female fisher is only two years old, the youngest a fisher can be to give birth to kits, said Lewis.

“Reproductive success of a female this young and this new to the South Cascades is a positive sign that the reintroduction area can support a self-sustaining fisher population,” said Tara Chestnut, an ecologist with Mount Rainier National Park.

The female fisher was released in the Gifford Pinchot National Forest in February 2016 as part of an effort to restore fishers to the state. Fishers, a housecat-sized member of the weasel family, were eliminated from Washington by the mid-1900s through over-trapping and habitat loss. They have been listed as a state-endangered species since 1998.

WDFW, the National Park Service and Conservation Northwest are leading the Cascades fisher reintroduction project. Sixty-nine fishers have been released in the South Cascades to date. Fisher releases in the North Cascades will begin this fall.

Documentation of fisher offspring is only one indication of success in the Cascades, said Lewis. Project partners estimate that 77 percent of the fishers released in winter and spring of 2015-16 survived their first year and 64 percent of females established a home range.

Project partners also worked together from 2008 to 2010 to release and monitor 90 fishers in Olympic National Park. Monitoring efforts there have shown that the released animals have distributed themselves throughout the Olympic Peninsula and are successfully reproducing.

Fishers are related to otters and wolverines and are native to the forests of Washington, including the Cascade Mountain Range. Fishers prey on various small mammals – mountain beavers, squirrels and snowshoe hares – and are one of the most effective predators of porcupines.”This is an inspiring milestone that shows how public, private, tribal and non-profit partners can together make big conservation wins happen, restoring our natural heritage and building a wilder future in our state,” added Dave Werntz, science and conservation director for Conservation Northwest.

Re-establishing viable populations of fishers in the Olympic and Cascade Mountains are important steps to down-listing the species in Washington State.

Sources of funding for the reintroductions include WDFW, the National Park Service, Conservation Northwest, the U.S. Fish and Wildlife Service, Washington’s National Park Fund, the Wildlife Conservation Society, the Doris Duke Foundation, Defenders of Wildlife, and those who purchase Washington State personalized license plates, among others.