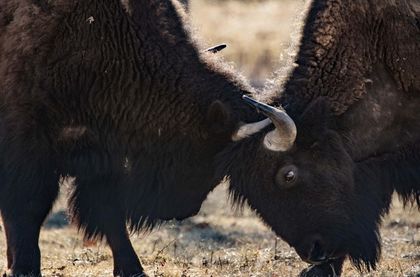 As the final preparations are being made to bring plains bison back to Banff National Park, Alberta, Canada, one of the world’s top experts on the animal says they will immediately change the environment in the area once they return.

Wes Olson, who has more than 30 years of experience working with bison, gave a talk Friday at the Whyte Museum of the Canadian Rockies in Banff on the ecological effects of having bison on the landscape.

“Bison reintroductions to the wild are incredibly important,” he said, noting it helps bison, reestablishes the ancient connection with bugs and birds, and helps restore the grasslands they live on. Bison dung is of tremendous value to native birds and insects.

“Bison have the second-warmest natural hair in any North American animal, next only to the muskoxen, and they shed it in great quantities in the spring,” he said. “It’s landing on the ground at almost exactly the same time that migratory songbirds are returning so that means that birds, for hundreds of years, have been lining their nests with shed bison hair. There’s been research that has shown a 30% increase in egg (and chick) survival in nests lined with bison hair versus not,” he continued.

“The bison restoration in Banff has always been based on three pillars: the cultural values, the historical values and the ecological values,” said Marieve Marchand, co-ordinator of Bison Belong, a group advocating for the return of native plains bison to the national park