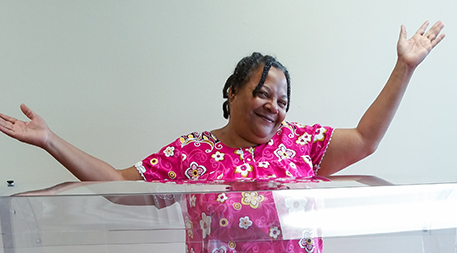 In Ann Arbor, Michigan, the local housing commission is completing floor-by-floor renovations in the five-story Baker Commons public housing facility with the goal of reducing energy use at least 20 percent.

Tens of millions of dollars are currently being pumped into revitalizing Ann Arbor’s low-income public housing, and renovations are in full swing. The Ann Arbor Housing Commission‘s makeover of the Miller Manor and Baker Commons public housing sites began in October of 2015.

Crews are doing both interior and exterior renovations, including storm drain and parking lot improvements, replacing and repairing sidewalks and addressing site signage and landscaping. Other improvements are being made to doors, windows, kitchens, bathrooms, heating and air conditioning systems, elevators, lighting, trash compactors, carpeting, painting, and plumbing and electrical systems, with an emphasis on making the buildings significantly more energy efficient.

It’s an effort by the Housing Commission, backed by the City Council, to preserve, improve and expand the supply of affordable housing in Ann Arbor.

“By the time we are done, we will have spent $55 to $60 million in renovations and new construction,” said Jennifer Hall, Housing Commission executive director. “We currently have 355 apartments, and when we are done we hope to have about 400.”

But, for the nearly 5 million American households who occupy low-income housing today (usually renters in multifamily buildings), performing such energy retrofits is not an option. They either don’t have the money or don’t have the right to make modifications So, they often pay the highest energy bills.

What’s the solution? Emerging trends in retrofitting existing low-income housing for energy efficiency, novel designs for new low-income energy efficient housing, and innovations in financing, collaboration and policy are starting to turn this picture around.

These days, for-profit as well as non-profit affordable-housing developers produce approximately 90 percent of new low-income housing projects in the United States, capitalizing on the federal Low-Income Housing Tax Credit. Some state-controlled housing finance agencies, which distribute the credits through a point scoring system, are using the competitive nature of the tax credits —just one-quarter to one-third of projects are funded on average — to encourage developers to advance energy efficiency.

One way to do this is by giving preference to builders who commit to meeting third-party certified green-building standards. Uptown Lofts, for example, received tax credits from Pennsylvania in part by opting to meet Passive House Institute US energy-efficiency criteria.

In Pittsburgh, Pennsylvania Uptown Lofts — affordable housing opened in February 2015 by the nonprofit ACTION-Housing Inc. to provide homes for young adults phasing out of foster care and low-income workers — is designed to be capable of generating enough renewable energy to meet or exceed its annual energy demand.

See website of the Network for Energy, Water and Health in Affordable Buildings