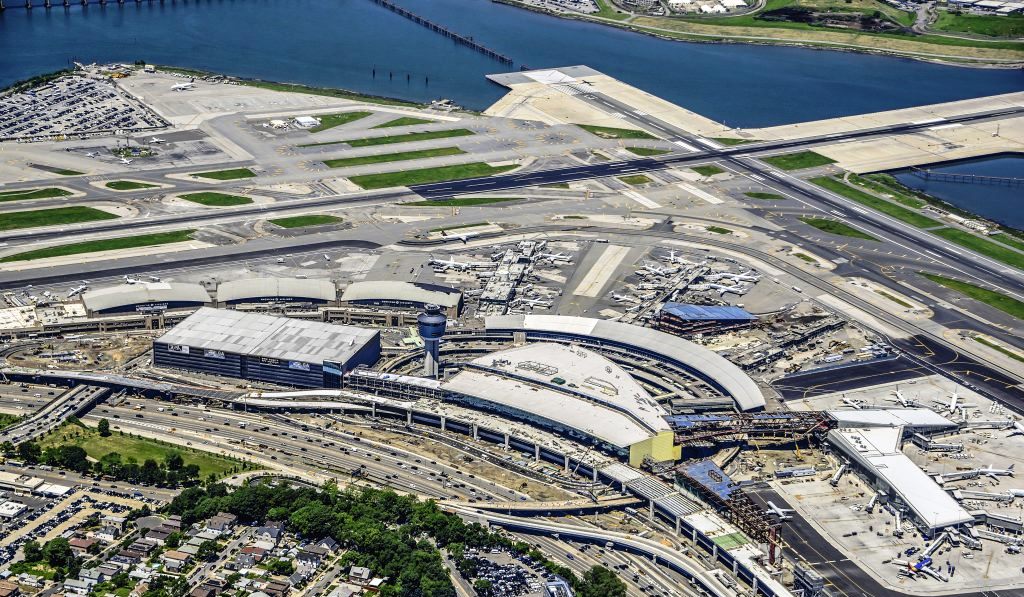 The LaGuardia Airport in New York City is vital to the regional economy. It employs approximately 10,000 people on-airport and contributes more than $13 billion in economic activity to the region, generating an additional 100,000 jobs and nearly $5 billion in annual wages and salaries.

On August 22, 2019, the LaGuardia Airport CTB Replacement Project became the first project to earn Envision recognition under Envision v3, the latest iteration of the Envision sustainable infrastructure framework developed and managed by the Institute for Sustainable Infrastructure (ISI).

Owned by the Port Authority of New York and New Jersey (PANYNJ), the LaGuardia Airport CTB Replacement Project earned Envision Platinum, indicating the project delivered a heightened range of social, environmental, and economic benefits to the host and affected communities.

“We are honored to receive the Envision Platinum award for our work in redesigning Terminal B at LaGuardia Airport,” said Stewart Steeves, CEO of LaGuardia Gateway Partners.

“Since day one, our priority has been building a terminal that offers a first-class guest experience and has a minimal environmental footprint. We’ve worked closely with Skanska-Walsh to create a design and construction approach that allows us to revamp Terminal B in a sustainable fashion, and this award demonstrates our overall commitment to this goal,” he added.

The airport is located on 680 acres in the New York City borough of Queens. It is a large commercial airport hub that primarily serves domestic markets. Located only a few minutes from Manhattan, LaGuardia Airport serves more than 19 million people.

PANYNJ embarked on an innovative Public-Private Partnership (P3) to replace the aging and outdated Central Terminal Building (CTB) at the LaGuardia Airport which has been operational since its dedication in 1964. It was most recently modernized and expanded in the 1990s.

This is the most ambitious P3 ever undertaken in the region and is the largest P3 ever in the United States. Under the P3, LaGuardia Gateway Partners will design, build, operate, and maintain a new Central Terminal Building (New CTB) facility. The P3 contract includes taking over the operations of the existing CTB and designing, building, financing, operating and maintaining the New CTB through 2050. The project will be financed using equity, debt, passenger facility charges, retail, and airline revenues.

The original CTB was designed to accommodate 8 million passengers per year. The New CTB will annually serve more than 14 million passengers, positioning the LaGuardia Airport to meet the passenger and airline needs of the 21st century.

The project consists of multiple components, including a new Terminal B; a Central Hall and a new West Garage with a pedestrian walkway connection between the new Terminal B and the new West Garage; a new central heating and refrigeration plant; a receiving and distribution facility; and the design and construction of contiguous aircraft ramp areas, new contiguous frontage roads and building and site utilities.

“This award showcases all the effort that went into planning, designing and building the new Terminal B at LaGuardia Airport in order to exemplify sustainable infrastructure and deliver a state-of-the-art facility,” said Ryan Prime, Skanska Sustainability Director and sustainability program manager for the Skanska-Walsh Joint Venture.

“The announcement of this award follows closely on the heels of the one-year anniversary since the launch of Envision v3,” said Melissa Peneycad, ISI’s Managing Director.

“We are delighted to have such an impressive project as the $4 billion LaGuardia CTB Replacement Project bring awareness to the Envision v3 sustainable infrastructure framework; a framework that raises the bar for sustainability. On behalf of ISI, I am pleased to award this project Envision Platinum for sustainability. Congratulations to the Port Authority of New York and New Jersey, LaGuardia Gateway Partners, Skanska Walsh Joint Venture, and the entire project team on this tremendous achievement,” she added.

The Envision sustainable infrastructure framework assesses project sustainability across five categories: Quality of Life, Leadership, Resource Allocation, Natural World, and Climate and Resilience. These key areas contribute to positive social, economic, and environmental impacts on a community during the planning, design, and construction of infrastructure projects.

The new Central Terminal Building at LaGuardia Airport is highly robust and resilient. The design and operations take into account a range of potential climate change threats such as seal-level rise, extreme weather events such as hurricanes and nor’easters, storm surges, and heatwaves.

To ensure that the Port Authority incorporates climate resiliency in every project, in 2015 the agency adopted Climate Resilience Design Guidelines. The intent of the guidelines is to maximize the long-term safety, service, and resilience of the Port Authority’s assets – including the new Central Terminal Building at LaGuardia Airport – now and in the future, as climate conditions change.

Planning for long-term monitoring and maintenance

In order for infrastructure to be sustainable it must be designed and built in a way that does not preclude efficient operations and maintenance over the life cycle of the asset. In addition, resources and plans must be put in place that ensure the asset is being managed and monitored to determine if the programs, systems and equipment are functioning as anticipated and that a response plan can be implemented should a fault be detected.

To this end, long-term monitoring and maintenance began well before the first shovel hit the ground on this project. Included in the commercial terms of this P3, the lease agreement requires LGP to operate, monitor and maintain the asset according to a robust set of expectations set forth by PANYNJ that are to be met throughout the duration of the 30-year concession period.

To periodically assess the operations of the terminal and develop solutions to improve the sustainable performance of the project throughout its life, LGP has included in their operations team a sustainability committee that includes key members from the organizations that form the consortium, as well as other important stakeholders such as airline operators and retail companies.

The LaGuardia CTB Replacement Project pursued some of the new credits within the Envision v3 framework, such as Conduct a Life-Cycle Economic Evaluation in the Leadership credit category. This credit encourages the use of economic analyses to identify the full economic implications and the broader social and environmental benefits a given project.