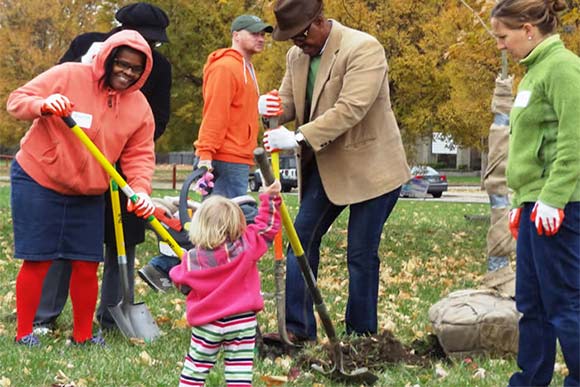 In the 1820s, Cleveland, Ohio was dubbed “The Forest City.” The city got the title when William Case, the secretary of the Cleveland Horticultural Society and Cleveland’s mayor from 1850 to 1851, encouraged the planting of shade trees.

But the city has since deviated from the former mayor’s forestation support. Sarah Ryzner, the director of projects for the Land Conservancy, explains that currently, the Land Conservancy is “looking to maintain the current tree canopy because more is lost every year.” Cleveland annually loses 97 acres of tree canopy.

The City of Cleveland along with five other organizations including the Land Conservancy, have formally recognized Cleveland’s largely depleted tree canopy and the benefits associated with replenishing deforested areas.

On October 20th, 2015 Cleveland city hall announced the Cleveland Tree Plan, a re-forestation plan that cites the roughly 10,000 public trees that have been lost since 1940 and continued deforestation of the city as a pressing crisis in Cleveland in need of immediate attention.

“The plan is unique in that it is not a city plan, but a community-wide collaboration to rebuild the urban forest through partnership,” explains an executive summary of the Cleveland Tree Plan. The reforesting partnership includes the Holden Arboretum, LAND studio, and Cleveland Neighborhood Progress.

The need for reforestation in a neighborhood is based on a variety of factors, with first priority being the current tree canopy coverage in a neighborhood. Then the plan takes into account factors such as the percentage of a given Cleveland neighborhood’s population with asthma, risk of storm water runoff, urban heat island rankings and the elderly population.