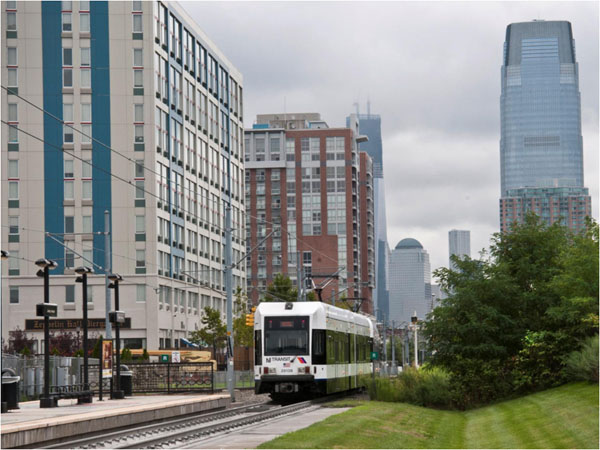 Note from Storm: A new report has just been issued by the Trenton-based non-profit organization, New Jersey Future, titled “OFF TRACK? An Assessment of Mixed-Income Housing around New Jersey’s Transit Stations.”

It reveals that, while New Jersey (my home state) has a larger number of transit stations per capita than most states, it isn’t using them well. In some cases, they surround newer stations with low-density, single-family housing (sprawl, in other words). In other cases, where older stations are located in distressed neighborhoods, they fail to leverage the transit station’s revitalizing potential.

Executive Summary of report: New Jersey’s extensive public transportation system and the neighborhoods that host its 244 stations –whether commuter rail, light rail, rapid transit (PATH and PATCO), ferry, or major bus terminals – are a valuable resource, allowing residents in many parts of the state to avoid driving on congested roads and to reduce their transportation expenses by substituting travel on foot or by public transportation in place of driving a private vehicle. But are the cost- and time-saving opportunities of transit-oriented development (TOD) accessible to everyone?

The state’s transit-station neighborhoods are a diverse group of places and are not all created equal, in terms of the degree to which they offer the benefits of living near transit to households of all income levels. Some station areas are effectively accessible only to upper-income households, due in part to a lack of diversity in housing options. Given that public transportation relies on density to thrive – that is, it works best when the number of people within walking distance of it is maximized – it is surprising how many transit stations (109 out of the 244) have a higher percentage of single-family detached housing units in their surrounding neighborhoods than the statewide average. A housing supply skewed toward single-family detached units can price out many households of more modest means.

In other higher-income places, such as along the Hudson County “Gold Coast,” the problem is not a lack of density but rather a strong real estate market in which demand is outstripping new supply, even where local officials generally welcome new development.

In an effort to promote equitable TOD – transit-oriented development that makes room for people of all income levels – in future developments, this report identifies transit-station neighborhoods currently having income distributions that can be described as “inequitable,” because they host either a disproportionate share of higher-income households or a disproportionate share of lower-income households, relative to their respective regions. It also looks at trends in rents and home values in order to highlight transit neighborhoods where emerging demand might pose the threat of displacing lower-income households if preventive steps are not taken.