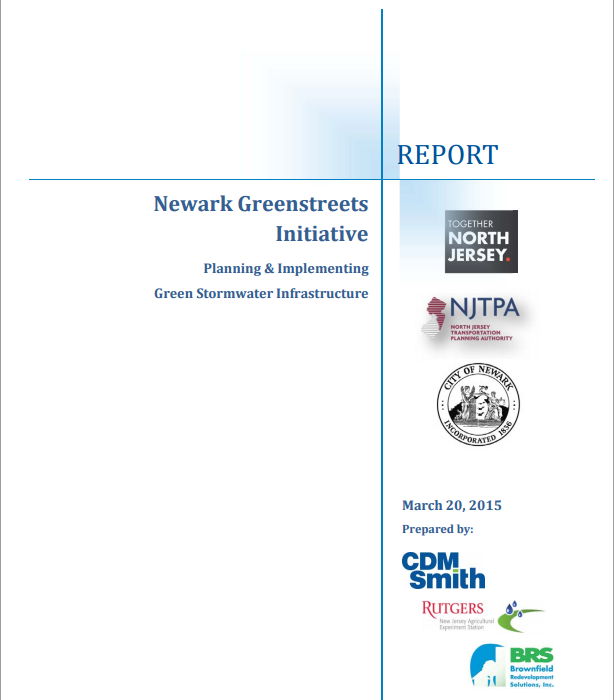 Under the auspices of a Local Government Capacity Building grant provided by Together North Jersey (TNJ) and the North Jersey Transportation Planning Authority (NJTPA), CDM Smith worked with staff from the City of Newark, New Jersey to enhance their ability to identify and act upon opportunities to deploy Green Stormwater Infrastructure (GSI) in the streetscape and on City‐owned land to advance Newark’s Greenstreets Initiative.

This report summarizes research findings, presents best practices and recommendations, and includes a number of technical appendices to support City staff as they continue to build their skills from site identification, to design, to construction documents, to implementation, maintenance and monitoring of GSI projects. Specifically, the City of Newark asked CDM Smith for technical assistance in the following tasks, in addition to overall project management:

The technical deliverables prepared for this project are attached to this report as appendices. The report itself was prepared to assist Newark staff and its partners in interpreting and using the technical appendices by “telling the story” of the project in an accessible format.

As important context for this project, the City of Newark is currently working with several jurisdictions ‐‐neighboring municipalities and the regional wastewater treatment plant, which is located in Newark ‐‐on a new Long Term Control Plan to reduce the instances of Combined Sewer Overflow (CSO) into the Passaic River. This is desirable as a matter of public policy, but it is also a regulatory imperative as the U.S. Environmental Protection Agency works with localities to ensure compliance with the federal Clean Water Act.

Newark’s extensive pavement and relatively old infrastructure for sewage and wastewater treatment combine to lead to CSOs in most heavy rain events, generally after 15 minutes of continuous rain. Reducing CSOs is an imperative that gives the conversation about stormwater management, using both green and gray infrastructure, urgent relevance at the municipal and regional levels.

The urgency is also being felt at the level of community stakeholders. In Newark, over thirty community‐based organizations and advocacy groups have come together to form Newark DIG (Doing Infrastructure Green!). This group meets monthly with support from the City of Newark, Rutgers University, NJ Department of Environmental Protection, and Passaic Valley Sewerage Commission (PVSC) to develop ES‐2 and implement community pilot projects such as rain gardens and rain harvesting systems, to conduct outreach and education in the neighborhoods about the role of GSI in managing stormwater and improving quality of life, and to advocate with City and State policy‐makers for a front‐line role for GSI in addressing Newark’s stormwater challenges.

Using this project for technical capacity development, the City of Newark launched a Greenstreets Initiative that identifies pilot projects for greening the urban landscape along City rights‐of‐way based upon community interest, environmental benefits, and potential to advance goals related to neighborhood revitalization, circulation and connectivity.

In collaboration with Newark Office of Sustainability and City Planning staff, the project has led to the preparation of engineering concept plans and technical design materials needed to advance GSI design.  This has included the identification of designs and landscaping best suited to manage stormwater, survive an urban environment, and absorb pollution and greenhouse gas emissions.   The Initiative has also led to a robust dialogue among City department staff and neighborhood stakeholders regarding GSI design and implementation in the context of pilot and stewardship projects.

Major findings during the course of the project were as follows:

In light of its benefits and the regulatory impetus to consider GSI when planning for stormwater management, knowledge of GSI strategies and their effectiveness is critical for municipal staff.  This is true not only for the staff traditionally tasked with managing the stormwater system. The creation of a cross‐departmental team that commits to a process of collective learning and project implementation is one of the most important recommendations of this report.

The selected technical assistance consultant, CDM Smith, held several trainings with City of Newark staff as part of its scope and found a high level of interest and commitment among those in attendance.  The best practices, recommendations, and technical appendices in this report are designed to serve as a reference manual for the cross‐departmental team as it continues to identify, design, and implement GSI projects over the coming years.