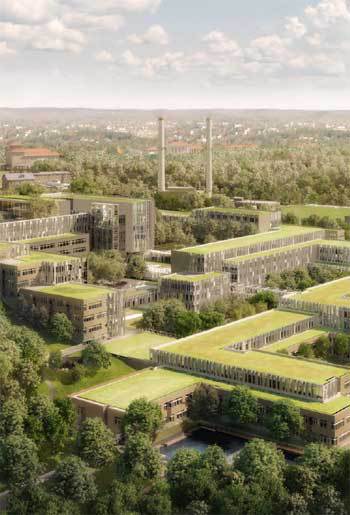 Note from Storm: Many readers will look at that headline and ask “How will we be able to tell the difference?” As a long-time resident of the Washington, DC area, I’ve been following the conversion of the historic St. Elizabeth’s mental hospital into the new headquarters for the Department of Homeland Security and the new headquarters for the U.S. Coast Guard—which was transferred into the Department of Homeland Security (DHS) back in 2003—from the very beginning. The jokes have been endless, if obvious.

Sadly, the contracting, budgeting, and project management has been a bit of a joke, too. I’ve always loved the idea of the project: it both repurposes and renews a historic asset, and does so in a very green manner. But, like so many projects of that era (can you say “Katrina”?), leadership and contracts were awarded based primarily on loyalty to the Bush administration, not necessarily on competence.

As a result, it’s $1.5 billion over budget and 12 years over schedule. Not only is it late, but DHS can’t even say for sure when (or if) it will be completed. All that aside, the article linked to here provides a rare look at the often-excellent work that has been accomplished to date. The article focuses only on the $646 million Coast Guard HQ portion of the project.

From the article: The General Services Administration (GSA) granted us a rare look at a Level 5 security campus, the new U.S. Coast Guard Headquarters, at the restored St. Elizabeth’s Hospital in southeast Washington, D.C. This $646-million project is just the first in a series that will transform a mid-19th-century mental asylum, founded by social reformer Dorothea Dix, into the new headquarters for the Department of Homeland Security, of which the Coast Guard is a major piece.

In a tour, Christian Gabriel, ASLA, national design director for landscape architecture at GSA, said “the goal of the new facility is improve operational efficiency by bringing together all the Homeland Security leadership in one place.” Leaders of the department will occupy revamped asylum buildings that once housed patients like Modernist poet Ezra Pound and John Hinkley, Jr., who attempted to assassinate President Ronald Reagan.

While some may balk at the $646 million price tag, imagine the cost if the GSA had used grey instead of green infrastructure to deal with all that stormwater. The design approach of this campus seems like a wise use of taxpayer money. And it’s good news that the biggest government construction project since the Pentagon is covered in green roofs; it would be upsetting if it wasn’t. It’s just too bad that the security is so high that more people can’t get in there to see it for themselves.