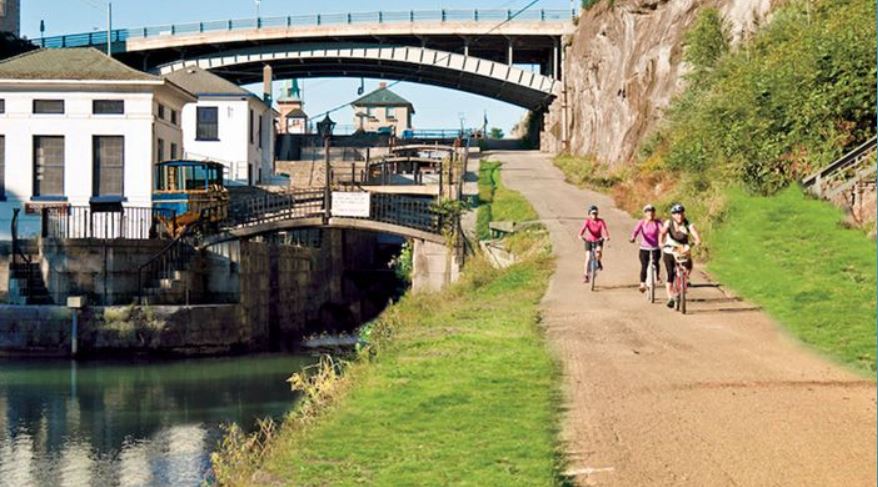 On May 17, 2019, New York Governor Andrew M. Cuomo announced a sweeping initiative to examine how the 195-year-old Erie Canal can be reimagined for the 21st century in order to help revitalize local economies, inspire new opportunities for tourism and recreation, and strengthen environmental resiliency along the historic waterway.

“There are 147 communities along the Erie Canal and we should do everything we can to help them become more resilient,” said Brian U. Stratton, the Canal Corporation‘s director. “Just as it transformed New York when it opened nearly 200 years ago, the Erie Canal can be transformed so it remains an essential piece of the fabric that defines upstate New York.”

A key pillar of this initiative is the Governor’s Remagine the Canal Task Force.

“The Erie Canal corridor is one of New York’s most iconic assets and remains a key economic driver for the region and the state,” Governor Cuomo said. “The Canal helped make New York the Empire State and this initiative will reimagine the canal and adapt it for new uses in upstate communities, furthering upstate New York’s unprecedented growth.”

This groundbreaking initiative will:

To help meet those goals, Governor Cuomo has created a task force that is an outgrowth of the Reimagine the Canals Competition, held last year by the New York Power Authority and New York State Canal Corporation. The competition rewarded the best ideas to enable New York’s canals to serve as an engine of economic development or spark new forms of recreation. This task force will explore many of the ideas that the competition has already produced. The New York Power Authority operates the Canal Corporation as a subsidiary.

Agriculture Commissioner Richard A. Ball said, “The Erie Canal is an important water source to a number of farms along its western banks. This task force offers the opportunity to now look at expanding the use of the Canal to minimize the risk of drought on our farms and support the production of high-value crops, specifically fruits and vegetables.”

The task force will be chaired by Joanie Mahoney, New York State Thruway Authority chair and former Onondaga County Executive, who will also oversee outreach in Central New York. Former Lieutenant Governor Bob Duffy will serve as regional co-chair in Western New York, while Joseph Martens, former Department of Environmental Conservation commissioner, will serve as co-chair in the Mohawk Valley. Other members will be announced in the coming weeks.

Department of Environmental Conservation Commissioner Basil Seggos said, “Reimagining the Erie Canal gives New York the unique opportunity to reduce the impacts of flooding and other environmental threats while simultaneously helping to scale back our carbon emissions and achieve New York’s nation-leading goals to reduce climate pollution. Water is perhaps New York’s greatest and most critical resource, and managing it to benefit and protect communities will strengthen our resiliency and safeguard New Yorkers.”

The panel is also expected to examine how canal infrastructure can be used to increase the reliability of the water supply to farms in Western New York—which now draw water from the Canal—and can enable additional land to be used for agriculture.

Helping guide the task force will be the Nelson A. Rockefeller Institute of Government, a part of the State University of New York. It will work to engage stakeholders and canal communities, a process that will include a series of public meetings across the state where residents, business owners and municipal leaders can provide input on the Canal’s future.

Acting State Parks Commissioner Erik Kulleseid said, “As we move toward completion of the Empire State Trail, the opportunities to expand and improve recreation for local communities and visiting Trail users by celebrating the canal infrastructure and neighboring lands are enormous. Nothing is more iconic and speaks more to what powered New York’s economic growth than the Erie Canal.”

The reimagining initiative builds on successful efforts by Governor Cuomo to invest in the canal corridor, including the Downtown Revitalization Initiative and Taste NY, which have stoked new industries, businesses and housing in canal communities.

Harnessing the Canal’s full potential to attract more tourism and recreation is a key focus of the Initiative. There are 1.6 million trips taken annually on the Erie Canal Trailway, the former towpath used by mules and horses to pull barges in the canals’ early days. The Trailway is part of Governor Cuomo’s Empire State Trail, which at 750 miles will be the largest state multi-use trail network when completed in late 2020.

Empire State Development President Howard Zemsky said, “Reactivating former industrial waterfronts has fueled economic growth throughout the Northeast and Mid-Atlantic and it’s only fitting that the Erie Canal-a game changer for the New York State economy when it opened—will further help to create jobs and opportunity in the communities along its banks.”

The navigation season on the Canal System, which includes the Erie, Cayuga-Seneca, Champlain and Oswego canals, runs today through October 16. About half of the system, including parts of the Erie Canal, along with the Champlain and Oswego canals, had their openings postponed due to high water flows stemming from heavy rains and snow melt.  For the third straight year, tolls have been waived for recreational vessels.

“So much of the New York that we know today was defined by the Erie Canal,” concluded Joanie Mahoney, the chief operating officer of the SUNY College of Environmental Science and Forestry and Reimagine the Canals Task Force Chair. “As it nears its third century, now is a great time to look at how the canal corridor can help increase community resilience, offer new and exciting recreational opportunities and boost the economies of the communities it travels through. The Erie Canal has long been the source of inspiration and no doubt will be again.”