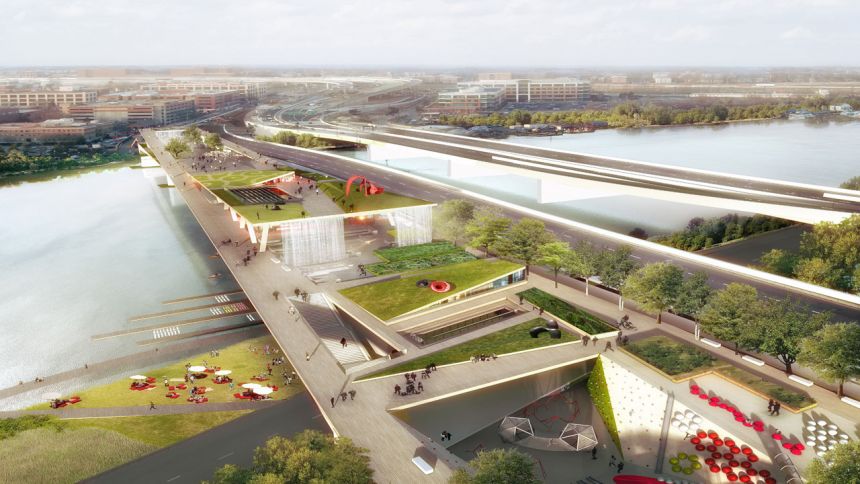 The District of Columbia can be divided into two parts these days: revitalized and not. They are separated by the Anacostia River.

On the west side, in the redeveloped Navy Yard and nearby Capitol Hill, the median household income is $91,000; on the east side, in Anacostia and Congress Heights, it’s $32,000. The poorer neighborhoods east of the Anacostia are 94 percent black, while their wealthier counterparts to the west are significantly whiter.

In contrast to the culinary attractions of the revitalized Navy Yard and Barracks Row areas on the west side, Wards 7 and 8 on the east side of the Anacostia River have few sit-down restaurants, and not a single full-service grocery store.

Scott Kratz is promoting an audacious plan to join the neighborhoods on either side of the river — and not just figuratively speaking. He hopes to build an attraction-packed park high above the Anacostia itself, spanning the water on repurposed concrete piers left over from a highway bridge that’s now gone.

The elevated park would be the size of three football fields, and would cost about $45 million. Construction is hoped to begin mid-2018, which would put the bridge park opening in late 2019.

Back in 2014, a design competition jury chose the celebrated Dutch architecture firm OMA, along with the landscape architects OLIN, to envision the park. Architectural renderings of their concept — a bridge in the shape of a flattened X with various activity zones, like an amphitheater and a cafe, on each of the X’s arms — caught fire on the internet and appeared in countless magazines and newspapers.

Note from Storm: I’ve been following the 11th Street Bridge Park story since its earliest days, when Harriet Tregoning (then head of DC Planning) proposed (to Scott Kratz) the idea of reusing some of the old 11th Street Bridge infrastructure, rather than demolishing it. Over a beer, Scott impressed me with his passion for using this project to serve social and environmental justice. I know he has caught some flack from local leaders whose primary goal seems to be serving the needs of private developers, but he seems to be courageously sticking to his mission. Congratulations on your wonderful work, Scott!