For over a century, Benjamin Siegel’s B.Siegel was one of Detroit, Michigan’s finest women’s apparel stores. The first location opened on February 21, 1884, and the firm grew to eight locations at its peak. The one at the corner of Livernois Avenue and Seven Mile helped give that stretch of road the nickname “Avenue of Fashion.”

The “Avenue of Fashion” today.

The revitalized building will act as a retail anchor and catalyze inclusive economic development along Detroit’s “Avenue of Fashion.”

The 7.Liv project will include 10 residential units—three of which will be affordable at 80 percent of the Area Median Income—as well as 20,500 square feet of commercial storefront and 29 underground parking spaces. Hessler has partnered with Jones Lang LaSalle to broker the commercial and retail spaces below the residential units.

“This 7.Liv project is further proof that Detroit’s economic comeback continues to extend into the neighborhoods, and we’re so pleased to be a part of the city’s revitalization,” said Peter Scher, Head of Corporate Responsibility at JPMorgan Chase, which has invested $150 million to support Detroit’s economic recovery. “The leadership across Detroit and collaborative efforts like this should be a shining example for cities in the U.S., and around the world of how to work together to create more inclusive economic opportunity.”

The B. Siegel store as it looks now.

Despite having faced vacancy and retail leakage challenges in the past two decades, like many of Detroit’s neighborhood commercial corridors, the Avenue of Fashion has seen revitalization and investment in recent years from a handful of new retailers and restaurants. The project—expected to take 14 months to complete—will help restore the prominent intersection of Livernois–7 Mile, which is bound by the historical residential neighborhoods of Sherwood Forest, Palmer Woods and University District.

“Capital Impact and our partners continually strive to create inclusive and equitable spaces in Detroit, and 7.Liv is yet another transformational project meant to benefit newcomers and current residents equally,” said Melinda Clemons, Detroit Market Lead for Capital Impact Partners. “There is a need to retain residents in the area, while continuously working to bring new tenants and customers into the community. With its partners, Capital Impact will help create spaces that lead to communities of opportunity for all.”

The project plans to create an influx of new employees and residents into the area, and in turn, provide a beneficial increase in spin-off consumer spending to local businesses along the Avenue of Fashion. Additionally, residential units will provide an opportunity for and encourage students and faculty of the nearby University of Detroit Mercy and Marygrove College to live and shop in the neighborhood.

Generating 27 temporary construction jobs during the substantial historic rehabilitation process, the long-term result is anticipated to create 30 full-time equivalent jobs by prospective tenants. In support of using Detroit-based contractors and employing Detroit residents, Hessler intends to implement benefits that are advanced by the DEGC’s D2D and Skilled Trades Task Force.

In fact, the performance of these benefits was proven successful on Hessler’s first Detroit development—the Iconic Building located on Cass Avenue—which resulted in 27 of the 50 jobs created being held by Detroit residents and three of the four businesses being owned by Detroit natives. DEGC additionally helped Hessler with structuring the financing of the deal and obtaining development incentives. 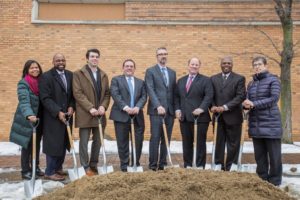 “This exciting project will serve as a catalyst, allowing businesses to fill in along the avenue and create momentum for a new walkable shopping district along the ‘Avenue of Fashion,’” said Matt Hessler, owner of Bagley Forest Properties and 7.Liv developer. “I’m excited about the business opportunities this project will generate, not only as the developer, but as a resident of the Livernois neighborhood.”

Innovative financial solutions like the ones created by the Detroit Neighborhoods Fund provide financing for multi-family residential properties, mixed-use real estate and grocery stores. The goal is to increase housing options for those with low and moderate incomes and help eliminate areas with limited access to retail. The fund is capitalized through a $20 million investment by JPMorgan Chase, as part of its $150 million Detroit commitment, and a $10 million investment by Capital Impact Partners.