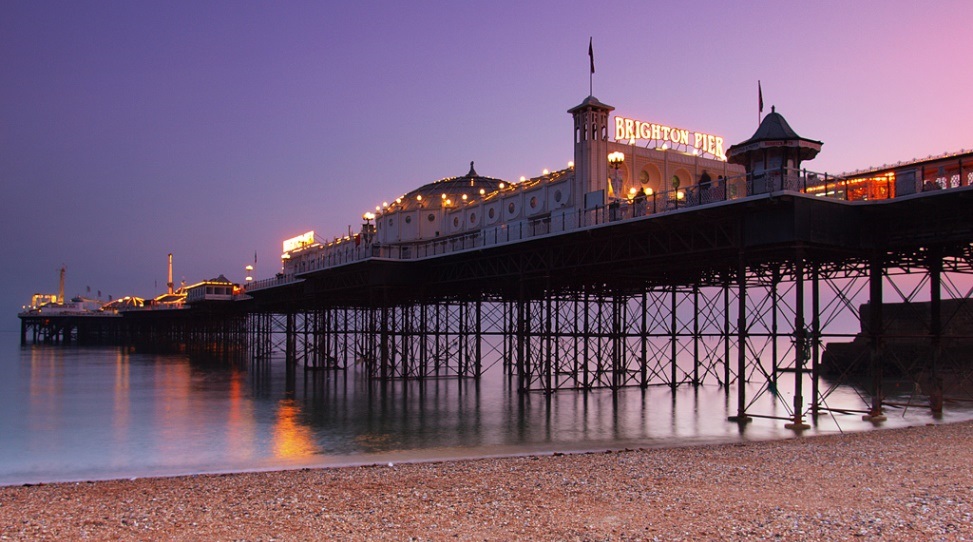 Brighton is a seaside resort on the south coast of England. It’s part of the city of Brighton and Hove in the county of East Sussex.

Brighton’s location just south of London has long made it a popular destination for tourists, as I (Storm) can attest. I lived and went to school near London as a young child, and have many fond memories of holidays at Brighton. 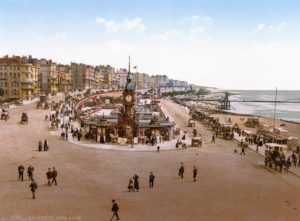 Brighton attracted 7.5 million day visitors in 2015/16 and 4.9 million overnight visitors, and is the most popular seaside destination in the UK for overseas tourists.

Present-day Brighton is renowned for its diverse neighborhoods, quirky shopping areas, and its vibrant cultural, music and arts scene.

It has a large LGBT population, leading to its recognition as the “unofficial gay capital of the UK“.

Brighton has also been called the UK’s “hippest city“, and “the happiest place to live in the UK“.

Now, revitalization has begun in one of Brighton’s few run-down areas.

Construction has begun on Circus Street, a £130 million innovation quarter on the site of the old municipal market in Brighton, England.

Architectural firm shedkm, based in London and Liverpool—in collaboration with developers U+I have created an ambitious redevelopment with a strong sense of place, distinct yet in tune with the unique city of Brighton and its people.

Richard Upton, Deputy Chief Executive of the developer, U+I says: “This is a major milestone for our Circus Street regeneration project and for Brighton at large. This truly mixed-use project will transform a long-overlooked site, creating a vibrant new place and bringing substantial cultural and socioeconomic benefits to this creative and energetic city. We are thrilled to be underway with construction, moving closer to fulfilling our ambition to deliver for Brighton a meaningful regeneration project that will revitalise the local area.”

shedkm’s masterplan is conceived as a rich composition of distinctive buildings and public spaces woven together to create a new destination. The design draws on the ‘patchwork’ of building styles within the Brighton cityscape and reinterprets them as part of a progressive and sustainable new quarter. The result is an exemplar urban design for mixed-use redevelopment.

Situated on Circus Street at the edge of Brighton’s academic district, the ambitious new 0.73ha mixed-use project is a redevelopment of a derelict municipal fruit and vegetable market. Led by regeneration specialist U+I, in partnership with Brighton and Hove City Council and South East Dance, the plans for Circus Street include 142 new homes, 450 student bedrooms, 30,000 square foot of business and start-up space, and a world-class international Dance Space.

Hazel Rounding, Director, shedkm says: “The start on site is a major milestone in our journey to create a new urban quarter in Brighton, which, through the belief and dedication of all stakeholders and individuals, has become a significant placemaking venture in our portfolio.”

Circus Street will be urban rather than suburban in scale while avoiding a ‘mega-block’ approach to massing. Instead, most of the individual buildings will rise to between 6-8 storeys in height with the exception of a small number of taller ‘marker’ buildings up to 13 storeys in height. Pedestrian routes through the site will refer back to historic street patterns prior to the development of the market. These will provide permeability and help break down the impact of the dense new development.

The new office building is viewed from Valley Gardens on the south-west corner of the site. South East Dance’s new Dance Space, the jewel of the masterplan, is located between the office and residential townhouses on Circus Street and activates the new Circus Square public space at the heart of the scheme.

Circus Square is a large events space, sited alongside other landscaped areas, working gardens and orchards and along Carlton Row, designed by JLG landscape architects. Quality retail units, restaurants and workshops are located at ground floor level throughout the development to activate the public realm and support a sense of community.

shedkm has conceived a robust but sensitive material palette that references the tones and hues of neighbouring buildings to ensure that Circus Street will harmonize with its urban context. This includes the use of black cladding (townhouses), white brick (offices), red brick (student accommodation) and galvanized metal cladding (The Dance Space). The palette in its entirety can be viewed from Circus Square events space.

shedkm won a competition for the project in 2012, and successfully obtained planning permission in September 2014. Construction is expected to complete in Spring of 2020. Helen Misselbrook, Design Guardian and Consultant Architect, shedkm said: “Circus Street will be a beautiful and inspiring place that keys into the creative life-blood of Brighton. We can now make tangible our design and realise our vision. A place for Brighton. A place to live, learn, dance, nurture and grow.” 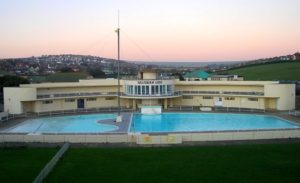 Saltdean Lido in 2007. It was designed to make swimmers feel that they were on an ocean liner.Photo by Simon Carey via Wikipedia.

This certainly isn’t the only restorative, revitalizing activity in the area.

For instance, they are restoring a historic public pool called Saltdean Lido (just outside Brighton and Hove) to its former glory.

The pool opened in 1938, but has long-since fallen into disrepair.

The second phase of the renovation project (subject to funding), will restore the main building, starting in 2018.

Featured photo of Brighton Pier is by hozinja via Wikipedia