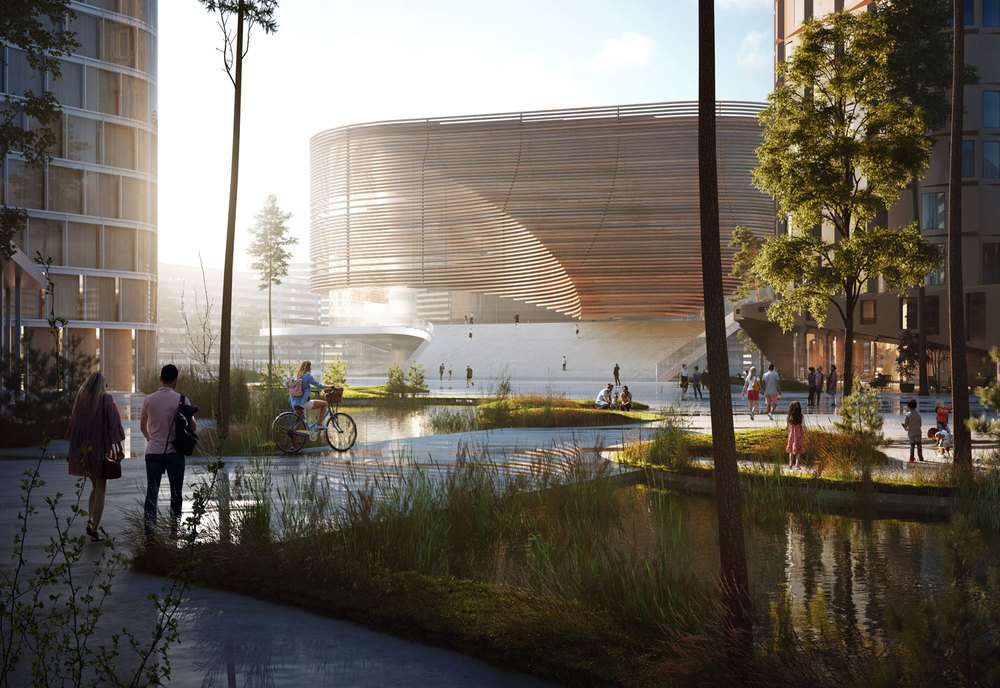 On August 30, 2018, the Copenhagen, Denmark-based architectural firm, 3XN has been commissioned by Nygårdstangen Utvikling—a consortium comprising Olav Thon, EDG Property and Rexir—to design a proposal for a new arena and masterplan that will repurpose, renew and reconnect an under-used section of downtown Bergen, Norway, with the goal of revitalizing it. In other words, it’s a good example of the 3Re Strategy at work.

The proposal is a response to Bergen City’s ambitious plans for sustainable redevelopment of the area. The arena is intended to be a catalyst for transforming the entire city city. It’s being designed to serve as an anchor for the redevelopment of an entirely new neighborhood that reconnects the inner city with the waterfront, thus becoming becoming a destination for concerts, sport and cultural events. 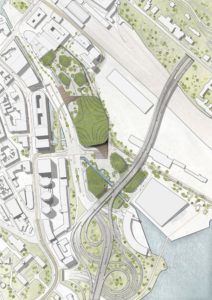 In many cities, arena buildings are placed on the outskirts due to scale and proximity to infrastructure. Building an urban arena in the Nygardstangen district in Bergen would make it possible to transform this unused central part of the city into a vibrant new public district, offering places to live, play, rest and work, as well as maintaining the mobility offerings of the place today.

Currently, this area is characterized by heavy traffic and urban spaces that have little connectivity to the rest of the city. Nygårdstangen Utvikling sees the opportunity to create an arena that potentially could become a catalyst and new anchor point not just for Bergen, but for the entire Vestlandet region. It will enhance business in the region, attract large scale cultural and sporting events for audiences from across Norway.

Nytårstangen Utvikling has hired Opus Bergen to head a feasibility study of the area and 3XN Architects to do a design proposal in cooperation with GXN and Arup.

“Having an arena in the center of Bergen is an exciting opportunity for the local community and local businesses. It will give Bergeners easy access to high quality cultural events and make Bergen a new cultural destination. Furthermore, an arena will be a great economic driver for the city of Bergen,” says Tor Fredrik Müller, CEO of EGD Property. 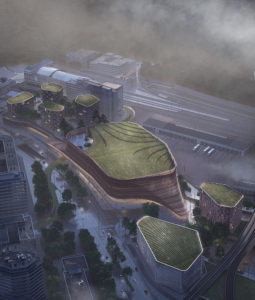 3XN’s proposal introduces the arena as an urban driver, much like a modern-day colosseum, that is exciting on days when major events are being hosted, but also offers generous public spaces and activities throughout the year. The urban arena is designed as the grand living room of a new neighborhood that also includes new housing, a police school, a hotel and cinema.

The entire masterplan aims at becoming an urban connector by stitching the area together with the adjacent districts and by delivering public plazas, vibrant streetscapes and pockets for city life supporting Bergen’s goals of sustainable urban development.

“The arena and the masterplan offer qualified solutions to the challenges of how the largely unused area can be used to the full of its potential by establishing an entirely new neighborhood, making it a destination for culture and improving connections between the city and the new beach,” says Nancy Jøssang, CEO, Opus Bergen.

Bergen is a city with a rich cultural and architectural history. Such a central arena requires sublime architectural quality and care for its surrounding context and unique character of its UNESCO heritage. 3XN believes that this new building should be considerate to its surroundings and attempt to benefit and enrich the lives of the people using it and living around it.

“In developing this new arena, we considered the characteristics of Bergen as it is now and envisioned how it can be in the future. In our design we have tried to solve the urban and infrastructural challenges by creating an arena in human scale using warm materials, taking the local climate in to account. We will change the area from a place for cars to become a place for people,” explains Jan Ammundsen, Senior Partner, Head of Design, 3XN.

All images courtesy of 3XN.