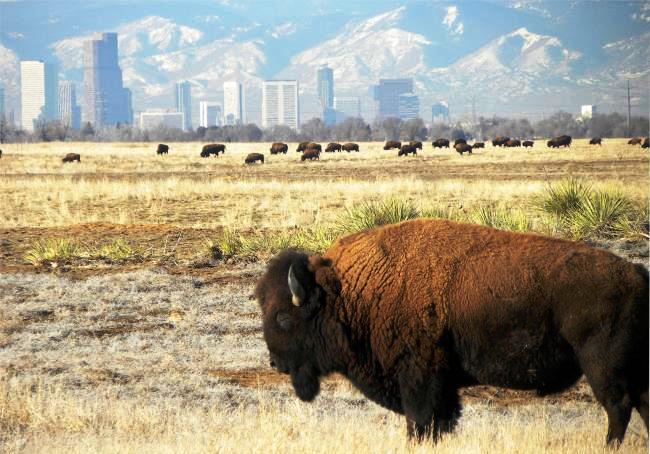 There’s a big blank spot on the map of the Denver, Colorado metropolitan area.

In the city’s northeast corner, the grid ends abruptly in an open prairie. Instead of cars and trucks, a herd of bison lumbers across the grass. Bald eagles perch in tall cottonwood trees, taking in the panoramic view of downtown Denver on the horizon.

This is the Rocky Mountain Arsenal National Wildlife Refuge, 15,000 acres of open space within one of the fastest-growing metro areas in the country. The land was first set aside by the Department of Defense during World War II for testing chemical weapons. 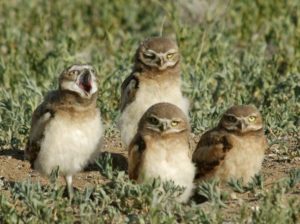 Humans had to steer clear, but animals—deer, coyotes, hawks, owls, and prairie dogs—found refuge here as the area outside the military zone was paved over.

By the 1990s, the military had discontinued its use of the site. Congress began transferring the land to the U.S. Fish and Wildlife Service—kicking off a massive environmental cleanup. Slowly but surely, the onetime testing ground was transformed into a park. Bison were reintroduced in 2007.

A new visitor center opened in 2011, and a 10-mile wildlife-viewing drive opened in 2016. Hiking trails offer an escape from the city barely 20 minutes from downtown. For nature-lovers in the Denver area, it sounds almost too good to be true.

And for many people, it is. Because the refuge has only a few access points, it can take longer to get there from a neighborhood on the park’s border than it does from the middle of the city. “For a lot of these neighborhoods, the nearest entrance to the refuge is miles away by car,” says Loretta Pineda.

She’s executive director of Environmental Learning for Kids, or E.L.K., an organization that works to connect kids in northeast Denver to nature. “We serve mostly low-income families, with parents who might not have the time or resources to drive all the way around to the gate. You’d be surprised how many students don’t even know the refuge is here, even though they’ve grown up right next to it.”

“We’re truly an urban refuge,” says David Lucas with the U.S. Fish and Wildlife Service. “We’re in one of the fastest-growing metros in America—what a tremendous opportunity we have to welcome our neighbors to experience wildness so close to home.”

That disconnect is one reason why The Trust for Public Land is teaming up with E.L.K. to build Montbello Open Space Park.

Once an empty lot strewn with trash and dry weeds, the five-acre property is being restored to native shortgrass prairie, with trails, interpretive displays, and art designed with help from E.L.K. students. An environmental education center will become E.L.K’s new headquarters—the home base the group has sought for almost 20 years.

The future park is just a mile from the refuge’s border. “We hope it draws people up the road to keep exploring the refuge,” says The Trust for Public Land’s Emily Patterson. “It’ll be a gateway into this beautiful shortgrass prairie ecosystem.”

Refuge managers are planning seven new entrances, including two that visitors will be able to reach via trails at Montbello Open Space Park. “Instead of driving miles around to the nearest vehicle entrance, families in the neighborhood will soon be able to stroll right into the refuge and begin to explore,” says David Lucas of the U.S. Fish and Wildlife Service. “And once you’re inside, you don’t have to go too far from the gate until the city fades away.” 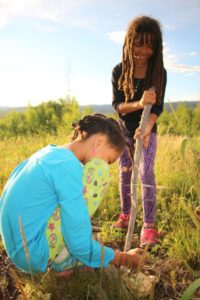 “When we’re out there with students and they experience that for the first time, I see a change in them,” says Pineda with E.L.K. “Once they’ve found that sense of solitude, they want more.”

After decades of cleanup efforts, the refuge is ready for more visitors. “There are 120,000 school-aged kids living right around the refuge,” says Lucas, “so we have a tremendous opportunity to welcome the community and help foster a relationship with the natural world.”

Lucas’s staff works with groups like E.L.K., local schools, scout troops, and Boys and Girls clubs to spread the word about the refuge and invite locals inside. And they’re working to lower the barriers—including the time it takes to get inside—that make it hard for families to explore it for themselves.

Pineda believes new access points and gateway trails—like those from the future Montbello Open Space Park—will make a difference for E.L.K. students and their families. “There’s that saying, you don’t know what you don’t know. Until now, neighbors just haven’t known about the peace and quiet out on the refuge, and how incredible that is,” she says. “When we’re out there with students and they experience that for the first time, I see a change in them. Once they’ve found that sense of solitude, they want more.”

The Trust for Public Land (TPL) doesn’t just save land. They save land for people to enjoy, from neighborhood parks to national parks. TPL depends on the ongoing support of individuals to make sure their work carries on well into the future.

TPL’s mission is to create parks and protect land for people, ensuring healthy, livable communities for generations to come. Every park, playground, and public space they create is an open invitation to explore, wonder, discover, and play. They’ve been connecting communities to the outdoors—and to each other—since 1972.

Today, millions of Americans live within a 10-minute walk of a park or natural area TPL helped create, and countless more visit every year.

This article first appeared on the website of The Trust For Public Land. Reprinted with permission.