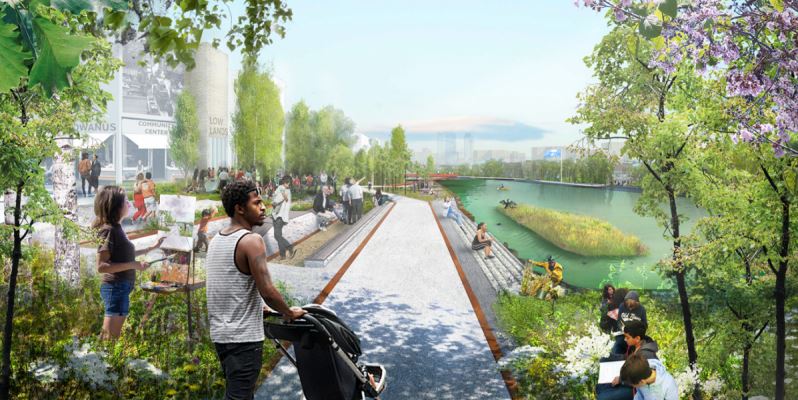 The GCC has been planting guerilla gardens on the salt marsh for nearly a decade, developing a variety of plants that grow well in the unusual ecosystem. Where 6th Street dead-ends into the canal, the nonprofit is experimenting with different types of bioswales to absorb the stormwater that is a major cause of contamination.

All the while, industrial businesses have continued to operate in the waterway, and residential construction has begun to boom on its banks.

Now, with the U.S. Environmental Protection Agency cleanup slated to begin at last, GCC has partnered with landscape architecture firm Scape to develop a holistic vision for the Gowanus that can accommodate that diversity of uses and improve environmental quality, without sacrificing the waterway’s idiosyncratic character. 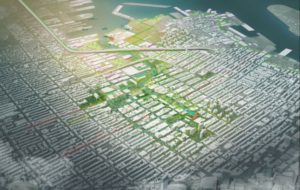 For instance, one of those visions—the Gowanus Lowlands—envisions a network of parks and public spaces centered on the Gowanus Canal and connected to its surrounding watershed. A vibrant system that prioritizes access for everyone, the Lowlands would shine a light on the canal’s history and singular beauty against a backdrop of a healthy environment and safe, connected streets. Residents, workers and visitors will be able to fully engage with all Gowanus has to offer, from its native plants and wildlife, to its thriving industry, to its hidden creeks and hypnotic waterway.

Another challenge will be reconnecting the Gowanus neighborhood with the revitalized Red Hook neighborhood. They are adjacent to each other, but were severed long ago by bad urban highway planning. Interstate 278 was rammed through the area without making any significant provision for maintaining flows between them. As seems to be the norm for highway engineers, they cared only about flows on the highway: its effect on the community was of little or no concern to them.

The Gowanus Canal Conservancy is a community-based non-profit organization that serves as the environmental steward for the Gowanus Canal Watershed. They envision the evolution of an open, clean and alive Gowanus Canal and watershed with accessible, connective open space; clean water, soil and air; and vibrant ecological, business and cultural activity.