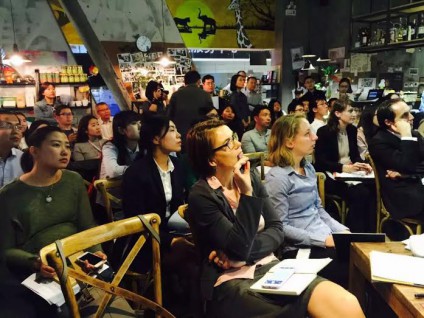 The second session of the World Future Council Future of Cities Salons series was held in Beijing, China on April 26, 2016. The event titled “China-Germany Dialogue on the Sponge City: Resilient and Regenerative” allowed Chinese and international experts to come together and discuss the concept of the Sponge City in front of several members of the local press.

The concept of the Sponge City has gained particular attention in China as an attempt to define an effective model to tackle, among other issues, the increase in inner city floods experienced by many cities in China. Extreme weather events, such as more intensive rainstorms, are actually expected to become increasingly frequent as a direct effect of climate change. Hence the urgency to find effective ways to deal with this growing risk.

Essentially, the Sponge city is designed to act pretty much like a sponge in the sense that during rainstorms it allows surfaces throughout the city to absorb as much water as possible. Currently cities are mostly impermeable systems that divert water into sewage drainages which often channel untreated water directly into local rivers (especially during high intensity rainstorms as only part of the water can be handled by the wastewater treatment infrastructure).

By regenerating and expanding its own freshwater eco-systems (rivers, lakes, urban wetlands, gardens, parks etc.) the Sponge city allows storm water to be absorbed by the soil, which also naturally purifies it and stores it as groundwater. This reduces the burden on urban sewage systems, and during extreme weather events, improves the capacity of the city to absorb water and as such decreases the risk of flooding.

See full article with 6 priorities for the creation of sponge cities + photo credit.