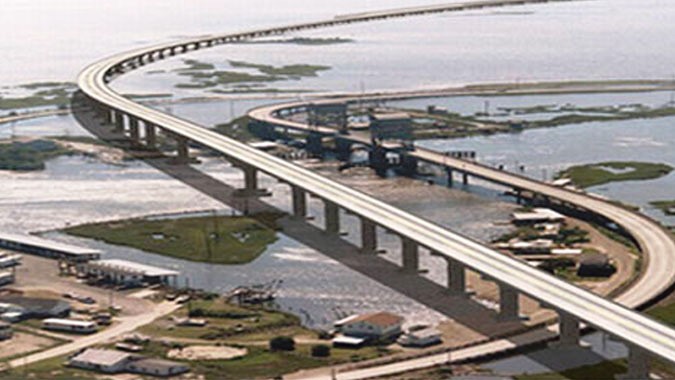 This just one of thousands of such expensive mega-projects that will be needed around the country, due in part to the Trump administration’s criminally irresponsible failure to address (or even acknowledge) climate change dooms coastal areas to an underwater future.

These funds will be allocated toward building an elevated 8.3-mile stretch of two lanes along LA 1 from Golden Meadow to Leeville. In order to alleviate the impacts of frequent flooding, as we witnessed in Tropical Storm Cristobal, the roadway will be elevated 22 feet above sea level and connect to the existing LA 1 bridge. 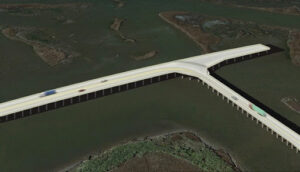 “Once again, a mega-project that has been on the books for is moving forward thanks to the innovative funding measures utilized by this administration,” said Gov. Edwards.

“This is a prime example of what the state is able to accomplish when we work together and have adequate resources. Major infrastructure projects like this one, the Loyola Avenue interchange in Kenner, the I-220/Barksdale Air Force Base Interchange in Bossier City, and many others are advancing as a result of steadfast dedication of so many partners and stakeholders, including the Congressional delegation. Together, we are advancing transportation to make Louisiana a better place to live, work and visit. We will continue to see these type of accomplishments as long as we strategically position Louisiana to take advantage of available funding opportunities,” he added.

“After months of hard work, the Trump Administration’s award of $135 million in federal INFRA funding to elevate LA Highway 1 is a major victory for our region’s safety and America’s energy security,” said Whip Steve Scalise. “Elevating LA 1 has long been a top priority of mine, and I have worked closely for years with DOT Secretary Elaine Chao, Governor Edwards, and local leaders to secure this vital funding.”

“As recently as June 8th, LA 1 was closed after becoming impassable due to flooding from Tropical Storm Cristobal. Along with being a hurricane evacuation route, LA 1 provides sole access to Port Fourchon and the Louisiana Offshore Oil Port (LOOP),” said Rep. Scalise.

“Elevating LA 1 is not only essential for the protection of Louisiana families, but absolutely vital for achieving American energy dominance and safeguarding access to our nation’s oil and natural gas supply. Securing the funding to complete LA 1 is not only great news for Southeast Louisiana, but for our nation – I applaud President Trump and Secretary Chao for recognizing this importance and for providing the critical support needed for the LA 1 project,” he explained.

“Port Fourchon is critically important to the energy economies of both Louisiana and the United States. This investment protects against flooding that could cut off access to the port, ensuring it can continue operating during high-water events,” said Sen. Bill Cassidy.

“This grant is a huge win for Louisiana and the nation,” said Secretary Wilson. “Elevating this roadway has always been a priority but was not able to come to fruition due to a lack of funding. This would not have been possible without the 2019 legislation championed by Rep. Tanner Magee, Sen. Rick Ward, and Sen. Page Cortez and signed by the Governor. I am so very proud of the team that worked on this application. Advancing this infrastructure will strengthen Louisiana’s economy, ensuring this region continues to be a leader in servicing the nation’s oil and natural gas production.”

LA 1 plays a vital role in the economy, as it services 17 percent of U.S. oil and gas production and is the only roadway leading to Port Fourchon, which handles nearly 90 percent of deep-water gas and petroleum extraction from the Gulf of Mexico. Ironically, it’s exactly this kind of commerce that’s causing the sea level rise behind the raod’s need for increased elevation.

“The awarding of INFRA funds to the LA1 project places the final piece of the puzzle that has been put together by the State, Parish, Port Commission, and Industry Stakeholders,” said Chett Chiasson, Executive Director of the Greater Lafourche Port Commission. “This is an excellent example of what hard work and perseverance by all levels of government can do and we are proud to have been a part of it. The future of our community and our economy is bright with the reliable, safe access this project will provide.”

The INFRA grant is a much-needed portion of the financial package needed to complete this $445 million project. Additional funding will come in the form of $260 million allocated from the state, and a combined total of $50 million from the Greater Lafourche Port Commission, Lafourche Parish and private sources.

“This is an extraordinary day for our community, our state, and our nation,” said Henri Boulet, Executive Director of the LA 1 Coalition. “The completed elevated LA 1 will host millions of dollars of commercial activity moving in and out of Port Fourchon, Grand Isle, and our vibrant Gulf of Mexico. Whether for recreation, fishing, coastal restoration, or production of our abundant natural resources, LA 1 travelers will have a much safer and dependable route to Louisiana’s valuable working coast.”

The project and the federal funding request received public support from Gov. Edwards, members of the Louisiana’s Congressional Delegation, both the Senate and House Transportation Committee Chairmen and Vice Chairmen, as well the local government. Most importantly, there are numerous business and industry leaders that have supported the project as a solution to a decades old problem.

Photos courtesy of Louisiana Department of Transportation and Development.