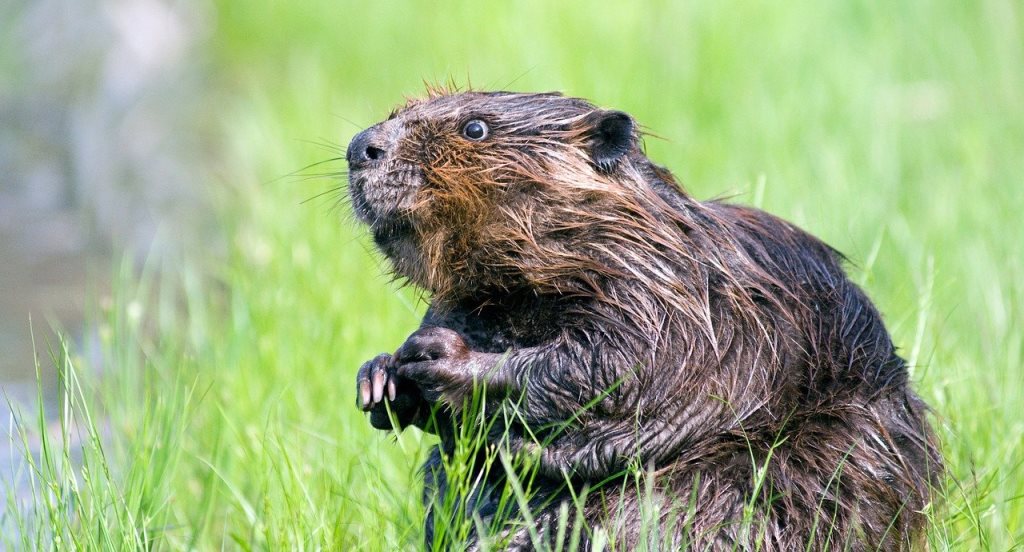 On July 12, 2021 in England, the first baby beaver to be born on Exmoor for 400 years has been spotted on the National Trust’s Holnicote Estate in Somerset.

The young beaver, known as a kit, has been captured on camera just 18 months after the restoration and conservation non-profit undertook its first licensed enclosed release of two Eurasian beavers in its 125-year history.

Footage from a static camera captured the six-week old kit swimming with its mother, back to the family lodge, while she stopped to nibble a branch.

Jack Siviter, one of the rangers on the Holnicote estate said, “We first had an inkling that our pair of beavers had mated successfully when the male started being a lot more active building and dragging wood and vegetation around the site in late spring. The female also changed her usual habits, and stayed out of sight, leaving the male to work alone. It was then several weeks until we spotted her again, and this is when our suspicions were confirmed that she had given birth, due to having very visible teats.”

“We are particularly pleased for our female, nicknamed Grylls due to her survival instincts, as she didn’t have the easiest start to life being orphaned at an early age. As a first time mum she seems to be thriving and it’s great to see her with her new kit,” he added. “The family should now stay together for the next two years before the kit will naturally want to go off to create a new territory of its own.”

A keystone species missing from the British countryside since they were hunted to extinction during the sixteenth century, beavers are playing a new and vital role in watercourse and flood management on the estate and creating an environment that is attracting more wildlife and diversity of species. As nature’s engineers, they are a natural solution to help tackle the biodiversity and climate crisis.

Since their introduction the beavers have been busy creating a dam complex made from trees, mud, stones and vegetation. This has helped slow the flow of water through the catchment, creating ponds and new channels to hold more water in the landscape as well as storing and filtering water to help clean it before it flows downstream.

By holding water back beavers can play a role in reducing the impact of floods and droughts both of which are expected to become more frequent with climate change.

The felling of some of the trees has allowed more light to flood into the woodland floor where ground flora such as sanicle and marsh marigold is now lush and green, while also helping with natural woodland succession building in resilience and creating different habitats to attract other wildlife.

This new wet woodland habitat is now a more diverse habitat offering more food and shelter benefiting and attracting a wide range of wildlife including amphibians, bats and insects such as dragonflies, and birds like sparrow hawk, grey wagtail, heron, moorhens and kingfisher. Otters are also now more regular visitors to the site instead of just passing through.

The beavers have also stripped bark from non-native conifers to create deadwood habitats which are good for bats, owls, woodpeckers and invertebrates.

Ben Eardley, Project Manager for the National Trust at Holnicote said, “The transformation of the habitat has been remarkable. To go from dry unmanaged woodland to a more open wetland complex in such a short time has not only boosted the variety of wildlife that we’re seeing on the estate, but also numbers. This is really important because the beaver are doing a lot of what we want to see in terms of conservation and land management. They are letting the light and the water into the site, helping natural processes and providing opportunities for a host of other wildlife.”

The beavers are one important part of the Trust’s habitat restoration work at Holnicote. Other work includes the first application in the UK of the innovative “stage 0” approach to river restoration, where a tributary of the River Aller has now been allowed to find its own course, creating a wetland habitat which has again attracted wildlife including peregrine falcons, grasshoppers, dragonflies, bees and wagtails.

Eardley concluded, “Due to historic drainage, water is the missing component in a lot of our landscapes, and the aim of the ‘stage 0’ work is to give water space so it is part of the wider habitat, delivering benefits for people and nature.”

Holnicote is one of the Trust’s Riverlands projects and is co-funded by the Interreg 2 Seas Co-Adapt program and the Somerset Rivers Authority.