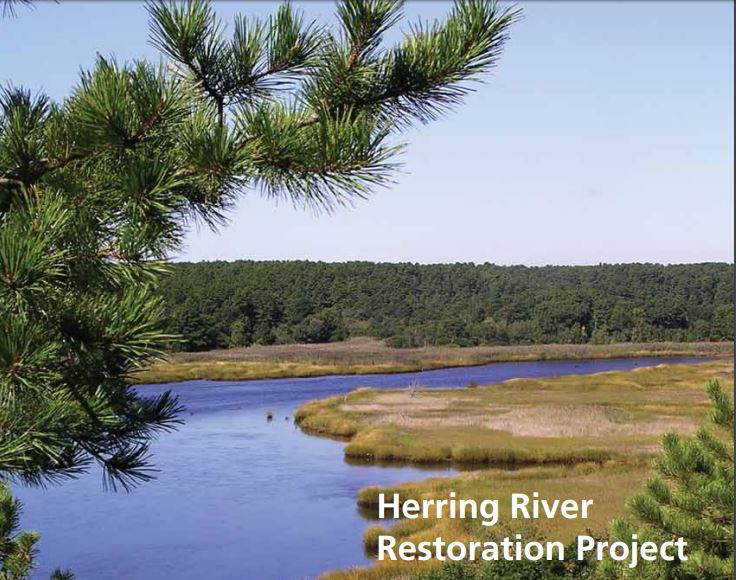 It’s hard to believe, but it’s been nearly 12 years since volunteers, town, state of Massachusetts officials, federal agencies, staff from the Cape Cod National Seashore, and consultants began planning one of the largest river restoration projects on the East Coast.

In August 2005, the National Seashore and the Wellfleet Board of Selectmen signed an agreement to study whether restoration of the Herring River was feasible.

The river, which meanders through Wellfleet, Truro, and the National Seashore, encompasses nearly 1,000 acres and more than six miles of waterways. In the distant past, the river supported a vibrant coastal river ecosystem and one of the largest nurseries for commercial and recreational fisheries in the Gulf of Maine.

Unfortunately, the ecosystem was dramatically altered in 1909 when civil engineers built a dike across the mouth of the river at Chequessett Neck in Wellfleet in an effort to control mosquitoes. Designed to block the flow of ocean tides and salt water, the dike forever changed the river’s ecosystem.

Acidic leaching caused fish kills, downstream shellfish beds were closed, and the nursery for fisheries was choked off. Because the tides could no longer flush nutrient-rich sediments farther upstream, the marshlands sank by up to three feet.

The current restoration project will attempt to restore the natural tidal flow to the estuary by replacing the old dike with a new bridge. The project will be adaptively managed through regular monitoring and assessment of system response to stepwise increases in tidal flow through the Chequesset Neck dike and the modification or removal of other man-made restrictions.

Monitoring variables have been selected to address both ecological and social concerns, vetted over a lengthy scientific and public review of ecosystem status, including consideration of the sensitivity of public and private infrastructure (Herring River Technical Committee). Predictions of system response have been greatly aided by hydrodynamic modeling of tide heights and salinity distribution for a full range of restoration scenarios ranging from the status quo to unrestricted tidal exchange.

Restored tidal range leads to higher sediment transport and deposition onto the wetland surface, as sediment-carrying flood tides again flood over creek banks and onto the marsh plain. This surface has subsided over the past 100 years of diking; therefore, restored sedimentation can allow the wetland surface to rise, thereby increasing storm-surge protection for roads and other structures at the edge of the flood plain.

Tidal restoration also produces a higher average water level in the estuary’s wetlands. Higher water levels will resaturate wetland soils that have been drained by diking and ditch drainage since 1909, and reverse the chemistry that has given rise to high acidity, toxic metals and fish kills in receiving waters (Portnoy & Giblin 1997).

“This will reverse the severe damage that has occurred over the past 100 years and bring back the critical ecological, economic and social benefits that a healthy and productive tidal estuary provides,” according to the Friends of the Herring River, a local nonprofit. “Reconnecting the Herring River to Cape Cod Bay and the Gulf of Maine will restore the natural coastal food web that numerous fish, birds and other wildlife depend on for their survival.”

If this restoration project is successful, the Herring River could become a model for river restoration up and down the coast.