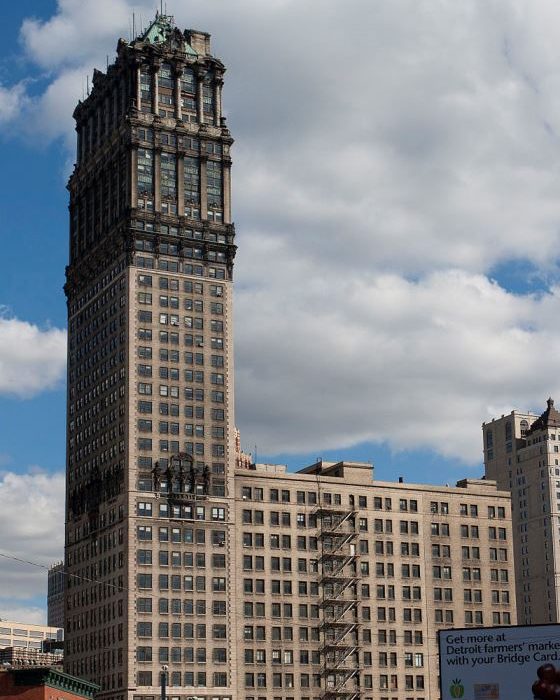 The most ambitious and perhaps the most architecturally complex project in Detroit, Michigan these days is Dan Gilbert‘s restoration of the Book Tower, the haunting Italian Renaissance-style skyscraper looming over downtown with its aged copper roof and ornate details designed by architect Louis Kamper.

It will almost certainly be the most expensive of the crop, with development experts saying Gilbert’s overall redevelopment of the Book Tower and adjoining Book Building could cost $400 million or more (his Bedrock Real Estate Services LLC said total cost estimates have not yet been determined, but did say that historic tax credits are expected to be part of the financing mix).

More than a decade ago, the 1924 building that cost $14 million to build sat vacant and decaying. At the time, “nobody believed it was heading for anything but the wrecking ball,” said David Di Rita, principal of Roxbury Group, which has several projects completed and underway along Washington and immediately adjacent.

What laid the groundwork for the Gilbert project is almost certainly the renovation of the Westin Book Cadillac Hotel a decade ago, which was the first in what would be a long string of real estate acquisitions, redevelopments and renovations that have made Washington Boulevard and the area generally west of Woodward Avenue far more connected.

“The Book Cadillac was the catalyst and it remains the anchor,” said Matt Lester, founder and CEO of Bloomfield Township-based Princeton Enterprises LLC. “But the bones of Washington Boulevard, we saw it as always having great potential for investment and for being ultimately highly desirable to run a business and reside. It’s a beautiful, wide boulevard right in the heart of things and yet has a little peace, tranquility and green space that others in the central business district don’t.”

Named after Detroit’s famous Book brothers, the Book Tower was briefly the tallest building in the city until the completion of the Penobscot Building in 1928. A taller Book Tower of 81 stories was origianll intended to be built at the opposite end of the Book Building, but the Great Depression cancelled those plans.

From its opening through the mid-1970s the Book Tower remained a prestigious address on Washington Boulevard. Like many structures in the city, its fortunes declined until 1988 when the owners defaulted on the mortgage.

In 1989, Travelers Insurance, the principal mortgage-holder, took possession and sold the building to developer John Lambrecht who previously purchased and renovated the Cadillac Tower a few blocks east. Lambrecht had similar plans for the Book Building and Tower; however, his untimely death later that year brought things to a halt.