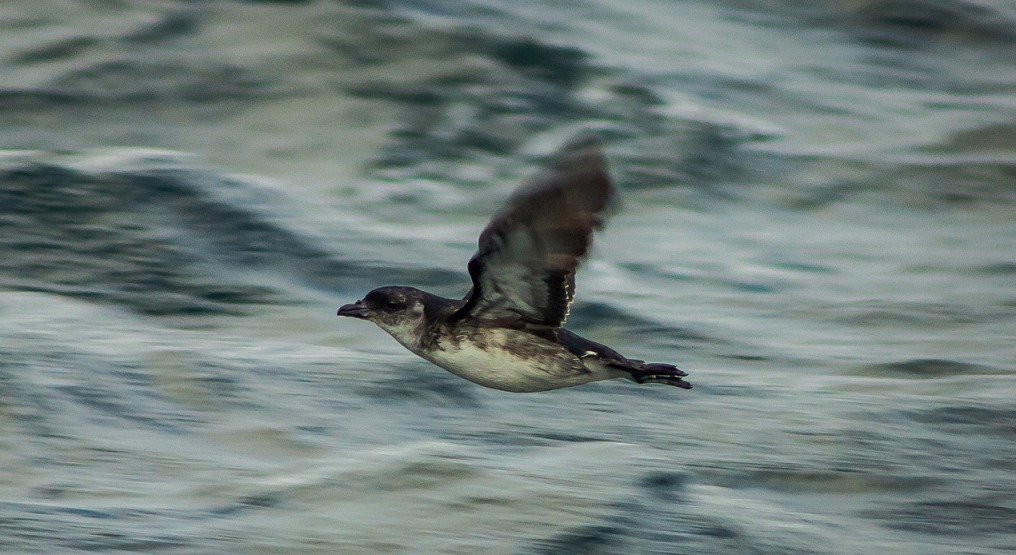 On December 12, 2019, Island Conservation and Chile’s National Forestry Corporation announced that they are successfully reviving the endangered Peruvian Diving-petrel population on Chañaral Island, Chile which has been abandoned by the bird since it was taken over by human-introduced invasive species.

Colony restoration will not only revive the island ecologically, but will give the fishing communities of Chañaral de Aceituno—nearest creek on the mainland at 8 kilometers from the island—opportunities to develop sustainable ecotourism, focused on the appreciation and enjoyment of the reserve’s marine and terrestrial ecosystems.

The Peruvian Diving-petrel is a small member of the order Procellariiformes, a group of seabirds highly vulnerable to the effects of invasive alien species. Most species in the order breed once a year, laying a single egg in a nest on the soil surface, under the ground, or in cracks between rocks—characteristics that leave them susceptible to predation by invasive mammals. 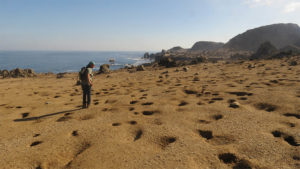 Sara de Rodt standing on Choros Island among a field of burrows taken over by invasive rabbits.

Once described as one of the most abundant and widely distributed seabirds endemic to the Humboldt Current, the Peruvian Diving-petrel has declined rapidly in recent decades due to nesting habitat destruction from guano extraction, poaching of adults, egg collection, bycatch, natural predators, competition and predation of invasive species, food competition with fisheries, and the effects of climate change.

At one time, the global population nested on only 13 islands, but today this has been reduced to six islands off the coast of Chile and Peru. The most significant breeding colonies are limited to two islands: La Vieja Island in Peru and Choros Island in Chile.

Chañaral Island once hosted the world’s largest Peruvian Diving-petrel breeding colony, with an estimated 100,000 breeding pairs, but this population was extirpated in the 1940s following colonization of the island by non-native foxes and rabbits. Today, there is no evidence that the petrels breed on Chañaral Island, although they have been observed diving and foraging nearby.

In 2017, after CONAF and Island Conservation removed invasive species from Choros and Chañaral Islands, they declared the Humboldt Penguin National Reserve free of invasive mammals. This was a milestone that promised to transform the island landscape and brought hope for the recovery of the petrel colonies.

After so many decades, the next challenge was to bring Peruvian Diving-petrels back to Chañaral Island now that it is, once again, a safe place to breed. Luckily, conservationists have some very effective tools at their disposal. Since the 1960s, social attraction research and experiments on seabirds have been carried out to accelerate the natural recolonization process.

Social attraction is a restoration technique that involves the use of different tools such as recorded reproductive calls, artificial nests, olfactory lures, and decoys of adults, chicks, or eggs. These tools help to attract the attention of birds of breeding age—primarily young or first-time breeders—as they seek out nesting habitat, eventually establishing new colonies.

In 1973, Project Puffin was created in the United States and successfully demonstrated the use of techniques to actively restore seabird species (Alcidae and Procellariidae families) that nest in burrows through translocation and social attraction. Since then, more than 128 active restoration projects have been implemented in more than 14 countries worldwide.

With support from American Bird Conservancy and the David and Lucile Packard Foundation, Island Conservation, CONAF, and a diving-petrel expert from the Universidad Católica del Norte in Coquimbo, Chile created a plan using insight from the success of Project Puffin. The team returned to Chañaral Island in September 2019, prior to the peak of the diving-petrel reproductive season, to conduct a survey of Chañaral Island and determine the most suitable sites to implement a social attraction system for Peruvian Diving-petrels.

Two sites were chosen and set up with two speakers, a solar panel, two 12-volt batteries, and an mp3 player with a looped recording of Peruvian Diving-petrel vocalizations provided by Conservation Metrics. A total of 31 artificial nests, made of PVC pipes, were installed and three motion-sensing cameras were set up at each site to detect and monitor the arrival of Peruvian Diving-petrels. The team left the island confident that young breeding petrels (one to two years of age) would hear the calls and investigate the new habitat.

One month later, CONAF returned to the island to monitor the project. They checked the sound boxes, solar panels, and artificial burrows; everything was going as planned. There was some evidence that raptors were present, and it appeared that gulls were interfering with the sound box wires, but the equipment was still intact and functional. 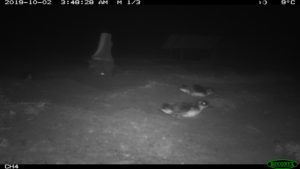 The team also collected footage from the camera traps. CONAF staff were surprised by what they observed—three Peruvian Diving-petrels in the same photograph exploring the site! Even more shocking, the date of the first photograph was the day that the team first left Chañaral in September! In the following days, Peruvian Diving-petrels were caught on camera at the second site and were even seen entering the artificial burrows.

After so much effort, those involved in these efforts are very excited. CONAF’s Ivan Torres channels this optimism: “We couldn’t believe it….we wanted to jump for joy. We have never seen Peruvian Diving-petrels nesting on Chañaral Island, but we may be witnessing the start of the recolonization of this species. We are very anxious not only to see Peruvian Diving-petrels established on the island but also to see the benefits to fauna and flora as a result of petrels returning. CONAF has allocated resources to include petrel monitoring within its Annual Operational Plan, and our park rangers are eager to carry out these activities.”

Peruvian Diving-petrels are considered a keystone species, providing vital ecosystem services by overturning soil when they build burrows and introducing nutrients to marine and terrestrial ecosystems through guano.

Island Conservation’s mission is to prevent extinctions and restore locally-extinct species by removing invasive species from islands. To date, they have successfully restored 63 islands worldwide, benefiting 1173 populations of 468 species and subspecies. Working together with local communities, government management agencies, and conservation organizations, they select islands that have the greatest potential for preventing the extinction of globally threatened species.