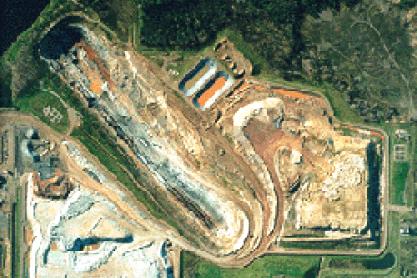 As documented in the seminal 2002 book, The Restoration Economy, mining operations in the United States—and all around the world—have for centuries made huge profits by extracting minerals on public land, and then have disappeared, leaving the public with the cleanup and restoration bill.

It’s a dynamic often referred to as corporate socialism, and was originally enable in this country by the General Mining Law of 1872.

In recent decades, governments have finally started making some headway on ending this massive rip-off of both taxpayer dollars and taxpayer natural resources.

The original model was to require by law that companies remediated the sites after extraction, but this was (and still is) easily circumvented when the companies simply declare bankruptcy, and reform as new corporations.

These convenient bankruptcies also relieved them of liability related to the hundreds of thousands of premature deaths that take place annually. These aren’t just former employees: they are also nearby residents who breathed the toxic, wind-born dust (such as uranium and asbestos) from the mines, both during operation and after they closed (but prior to remediation).

The more recent model is to require mining companies to put up a restoration bond before they begin operations. This practice has been far more successful, although many states, provinces and nations don’t require bonds large enough to fully restore the land, and other don’t require sufficiently rigorous restoration standards.

Here’s an example of how the system works in the U.S. state of Wisconsin.

On December 12, 2022, the Wisconsin Department of Natural Resources (DNR) issued a Certificate of Completion of Reclamation to Flambeau Mining for the industrial outlot portion of its mining site near Ladysmith in Rusk County. The DNR also issued a Revised Mining Permit to the company.

Flambeau Mining Company was issued a mining permit and other necessary permits to operate an open pit copper mine in early 1991. Ore shipments from the mining site began in 1993 and continued for more than four years.

Site reclamation, including backfilling of the pit, was substantially completed by the end of 1999.

Flambeau Mining Company was later issued a Certificate of Completion of Reclamation for 149 acres of the 181-acre mining site in 2007.

The remaining 32 acres, referred to as the industrial outlot, includes an area for which the original reclamation plan was modified to allow alternate uses of the project buildings and adjacent areas.

The DNR solicited and received public comments on that preliminary determination as well as a draft Revised Mining Permit.

After consideration of public comments, the DNR determined that Flambeau Mining Company met its obligations under the approved reclamation plan, as modified in 1998, and that the Certificate of Completion of Reclamation covering the industrial outlot portion of the mining site should be issued in accordance with applicable laws and rules.

With issuance of the Certificate of Completion of Reclamation for the industrial outlot, reclamation of the entire mining site has been certified as complete.

The DNR considered the public comments received during a public comment period earlier this year and the information in the DNR files on the reclaimed Flambeau Mine project to develop the conditions in the Revised Mining Permit. The Revised Mining Permit will remain in force until the remaining reclamation bond is released, which will not occur for a minimum of 20 years.

In response to public concerns regarding the water quality of Stream C, an intermittent stream that traverses a portion of the former mining site, DNR and Flambeau Mining Company have agreed that additional assessment of the biologic condition of Stream C is appropriate to determine whether Stream C is attaining its designated uses. Flambeau Mining Company will develop a work plan for the study consistent with all applicable DNR rules and guidance and submit it to DNR, for review and approval in early 2023.

The Department anticipates the company will initiate assessment activities in 2023 and that all critical aspects of the work, including sample collection and analysis, will be verified by DNR. The DNR will determine what, if any, additional monitoring or other actions are needed once the study is completed.

See the DNR decision documents pertaining to the Certificate of Completion of Reclamation, the Revised Mining Permit and the DNR Comment Summary and Response document on the DNR’s Reclaimed Flambeau Mine webpage.