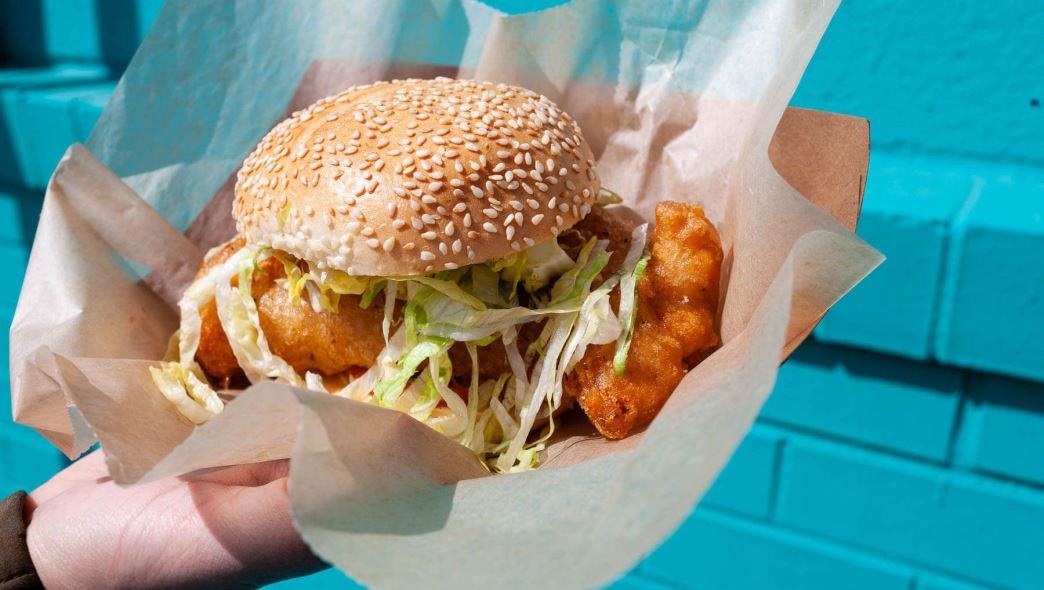 As documented in Rewealth, my (Storm Cunningham) 2008 book from McGraw-Hill, the root of the word restaurant is “restoration.” Now, restaurants all over the world are taking this connection literally, as invasive species—such as the lion fish in the Caribbean, and wild boar all over America—are increasingly showing up on menus as an effective tactic in ecological restoration strategies.

Here’s the latest example, which coincidentally involves Union Market, one of my favorite revitalization successes here in Washington, DC. My wife (Dr. Maria MacKnight, of Wellness Restoration) and I were there just yesterday in search of a meal, and walked right by The District Fishwife without realizing that ta true restoration economy meal was staring us in the face: 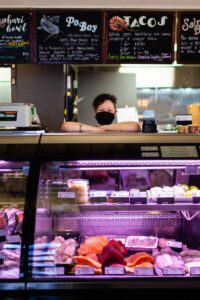 Fiona Lewis in Union Market, a wonderfully revitalized section of Washington, DC that was mostly run-down, abandoned warehouses just a decade ago.

When chef and fishmonger Fiona Lewis decided to move to Washington D.C., the Melbourne, Australia native assumed she would have access to excellent fresh seafood, due to being so close to the largest estuary in the nation. But when she got here, she found herself asking where all the seafood was.

“I was excited to be moving somewhere that’s about an hour from the ocean and thinking, ‘that’s it we’re getting amazing, fresh seafood all the time’ and that obviously wasn’t the case,” said Lewis.

Fish have always been a part of Lewis’ life; both of her grandfathers were fishermen, and she took her first cross-country fishing trip at only two years old. As a child, she learned from her father who bred and released endangered fish to help give native species a chance to repopulate. After moving to Washington, D.C., Lewis discovered how issues of impaired fish habitat, poor water quality and invasive species are plaguing Chesapeake waters.

Upon finding the lack of local seafood markets, Lewis decided to start her own business and put sustainability at the core of its mission. In 2013, she opened The District Fishwife, a seafood market offering fresh fish and prepared foods in Washington’s bustling Union Market. From the start, Lewis faced the challenges of starting a new business in a new country.

“I had to learn a whole new region of species and what sustainability means for each of those species,” Lewis said.

In her search for delicious seafood, Lewis was lucky to have welcoming mentors and thankful for biologists with the National Oceanic and Atmospheric Administration (NOAA) for teaching her about local and migratory species. With new contacts and distributors, she was able to fill The District Fishwife with a range of seafood options, and added invasive species to her offerings.

For example, in past years she served northern snakehead, a fish she was familiar with from her time living in Myanmar. However, snakehead has become more difficult to keep in stock. So, she found a fish that is more available, equally delicious and even more of a threat to the Bay’s marine life: blue catfish. 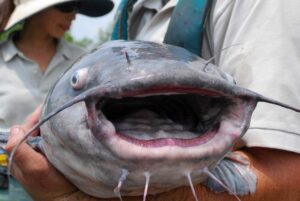 Blue catfish were introduced to Virginia tributaries of the Chesapeake Bay in the 1960s and 1970s to increase recreational fishing, but the species would soon become one of the region’s biggest ecological problems.

In the James River and Rappahannock River, where it was first introduced, the species is estimated to make up 75% of the total fish biomass, a warning sign of what is to come as blue catfish move into almost every tributary surrounding the Chesapeake. Growing to over five feet long, weighing more than 100 pounds and eating 8-9% of their body weight per day, blue catfish are taking over valuable habitat and outcompeting native species. Examinations of blue catfish stomach contents have shown they are eating striped bass, white perch, American shad, Atlantic menhaden, blue crabs, mussels and clams.

Blue catfish is a great choice for sustainable seafood markets not only because its harvest reduces pressure on native species, but because it also makes for a great dish. It is a clean-tasting, flaky fish that can be used a variety of ways. Lewis sells blue catfish fillets and offers an invasive fish fried sandwich which will sometimes contain blue catfish. Offering these dishes not only leads to fewer invasives in the water, but also gives other fish a much-needed break from human consumption.

“We need to eat fish you’ve never heard of,” Lewis said. “And that’s part of how we get to eat tuna, cod and wild species for a lot longer—by diversifying our palettes and diversifying what we’re eating.”

Today, Lewis has a loyal customer base that has come to understand the importance of eating sustainable seafood. When people tell her they’re making a stew for dinner and she recommends the blue catfish, they know she’s giving them the best option. Her prepared foods section allows people to taste different things without having to buy a new fish and cook it themselves.

Part of sustainability is making the most out of every fish, so at The District Fishwife nothing is wasted. Fiona sells cuts like fish collars and makes stock out of the fish after the filets are cut. At the end of the day all of the organic waste, including serving utensils and plates, are industrially composted.

Another approach to selling invasives

One is Wendy Stuart, a food systems consultant who founded the Wide Net Project and principal at the Food Works Group. Through The Wide Net Project, Stuart buys and sells blue catfish to restaurants and donates the proceeds to nonprofits that tackle hunger relief.

In 2020, for example, sales to MOM’s Market alone funded 14,840 donated portions of blue catfish. This small fraction of regional catfish sales has a significant impact for food organizations that often struggle to access expensive, lean protein.

Stuart and Lewis both see the growth of the invasive fish market as being beneficial to Chesapeake watermen. As stricter limits are placed on species like striped bass, which have been a major source of income for watermen, buying and selling catfish provides an almost year-round source of income. But in order for that to happen, Chesapeake consumers need to understand the ecological value of eating these types of fish.

At the Chesapeake Bay Program, our Invasive Catfish Workgroup is educating the public on the threat of blue catfish, making it easier to sell by removing processing barriers, and developing tributary-specific management plans that seek to limit the number of invasive catfish in the Bay watershed.

There are no limits on blue catfish harvests in Maryland for commercial or recreational fishers, and people are encouraged to remove blue catfish from the water after correctly identifying the species. If you want to catch and prepare your own fish, check your local fish advisories. You can try one of several recipes for your next dinner. And if you don’t feel like cooking, just head to places like The District Fishwife for a delicious and sustainable meal.

All photos courtesy of the Chesapeake Bay Program.

With the exception of the opening two paragraphs, this article was written by Marisa Baldine, and originally appeared on the website of the Chesapeake Bay Program. Reprinted here by permission.