For the past five years, a group of villagers in the delta of the Irrawaddy River in Myanmar (formerly known as Burma, before multinational oil companies installed a military dictatorship, which then changed the name) has painstakingly planted 2.7 million mangrove trees in an attempt to begin to restore an ecosystem that has been disappearing for decades. 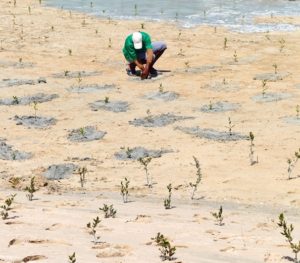 But the work is laborious, and the local nonprofit guiding the work wants to cover a much larger area–so they’re now turning to tree-planting drones.

The drones, from the startup BioCarbon Engineering, can plant as many as 100,000 trees in a single day, leaving the local community to focus on taking care of the young trees that have already started to grow.

In September, the company will begin a drone-planting program in the area along with Worldview International Foundation, the nonprofit guiding local tree-planting projects.

To date, the organization has worked with villagers to plant an area of 750 hectares, about twice the size of New York City‘s Central Park; the drones will help cover another 250 hectares with 1 million additional trees. Ultimately, the nonprofit hopes to use drones to help plant 1 billion trees in an even larger area.

Meanwhile, in Bengaluru, the capital of the state of Karnataka in India, a team of scientist from the Department of Aerodynamics has come up with an idea to restore forestland using drones and seed bombs to save innumerable hours of manual work.

Seed-bombing via drone plants trees by embedding organic seed balls in the ground. The advantage of using seed bombs is that they do not need to be completely buried in the ground in order for them to germinate. To increase the odds of germination, the seeds being used for the operation will be wrapped in manure and soil, prepared by the Department of Forests in Kolar.

BioCarbon Engineering is a small 10-person company in Oxford, England that is pioneering the use of drones to reforest the planet.

BioCarbon Engineering’s technology is increasingly important as many governments and businesses have committed to restore 350 million hectares by 2030, which would be near impossible with current planting methods alone. Adopting scalable ecosystem restoration solutions is pivotal not just for these commitments, but future generations; as planting forests fast could mitigate climate change and reverse the loss of top soils, which cause droughts and other natural disasters, leading to entire communities becoming environmental refugees. 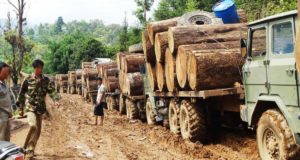 BioCarbon’s system works in two stages: first, the mapping drone flies over the land and takes detailed images giving the information on terrain, nutrients, and biodiversity. That data is processed through a machine learning algorithm and a precise planting pattern is generated. Next this map is uploaded into planting drone which flies at 2-3 meters above the ground and fires a biodegradable seedpod at each pre-determined position. The seed pod penetrates the soil, is activated by moisture and contains all the nutrients for healthy tree growth. With 150 swarms of 6 drones cooperating together, we could plant 1 billion trees per year, with the potential to scale to 10s of billions of trees each year.

The British team has successfully demonstrated growth for a number of tropical and boreal species in indoor and outdoor trials, and developed a unique system that uses a combination of ingredients to match different requirements for each tree to succeed. In just one year of full-scale operation, BioCarbon Engineering will be able to sequester 18 million metric tons of carbon dioxide, the equivalent of all the car emissions in the UAE.

BioCarbon Engineering’s mission is to play a key role in restoring the planet’s depleted and destroyed ecosystems at 10 times the rate, and at just 15 percent the cost of traditional hand planting methods. 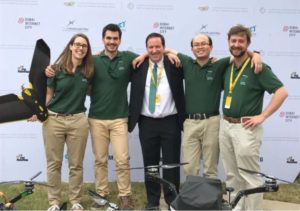 On March 3, 2017, BioCarbon Engineering won second place at the UAE Drones for Good competition. The finalists were selected from 1,017 entries from 165 countries and were evaluated on their documentation, technical performance, stage presentation and social mission.

At the competition, BioCarbon Engineering demonstrated their planting system, mapping and monitoring method, biodegradable seedpods, business model and impact potential. Leveraging technical ability from its specialist team and intellectual property portfolio, the team revealed how quickly hundreds of trees could be planted; how entire ecosystems can be restored using enabling emerging technologies; how the data collected from each operation is crunched by machine learning algorithms in order to provide clarity on how ecosystems around us develop; and to further improve restoration practices.

Here’s what BioCarbon Engineering says about their approach to landscape restoration:

“We are often asked about our approach to environmental restoration and we are working on it day and night in order to create a truly game-changing solution. While coming up with a perfect strategy that can address all of nature’s diversity and complexity is not easy, we believe that it is possible, and there are several factors that are in place to make it a success.

First, the political will is in place to restore global forests and to combat desertification and Climate Change. The policy proposals which lend support toward restorative action provide a framework for undoing the decades of degradation befallen on forests and their associated ecosystems around the world. BioCarbon aims to support this momentum and help direct it in the most efficient and effective manner; ensuring that key investments in this area have the greatest impact. 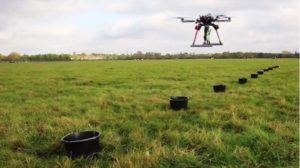 Second, in the past, questions regarding restoration have focused on the what, why, and where, but recently answers to these inquiries have became available. In 2011, The World Resources Institute (WRI), together with partners at the International Union for Conservation of Nature (IUCN) and researchers at the University of Maryland developed a restoration map showing key areas around the globe where forest landscape restoration could take place. The question is therefore now focusing on the “how” of what restoration will look like. BioCarbon Engineering stands to answer this final question, with a unique scalable solution that takes the best data available and enables local specialists to restore their landscapes both quickly and cheaply.

Finally, there is growing public support from people and NGOs around the world who are seeking land restoration for its many environmental, social and economic benefits. We thus are paying close attention to issues such as land use, land tenure and the relationships between stakeholders involved in restoring areas before rolling out a project. Working with NGOs and community groups invested in an area is a key part of our practice, as they will ultimately be the stewards of their land and contribute to the project’s success.

Of course there are many more factors that we are thinking about and that need to be accounted for while building a truly global one-stop solution for ecosystem restoration. We adopt the view that land restoration should include solutions that (1) rapidly generate healthy soil or restore degraded or contaminated soil; (2) increase soil carbon content and sequestration; and (3) reduce pressure on agricultural soil that is particularly vulnerable to erosion. We hope that in combining community support, political will and cutting edge technology we will be able to scale-up ecosystem restoration by planting at least one billion trees per year.”

Unless otherwise credited, all photos are courtesy of BioCarbon Engineering. Featured photo via SCC India.