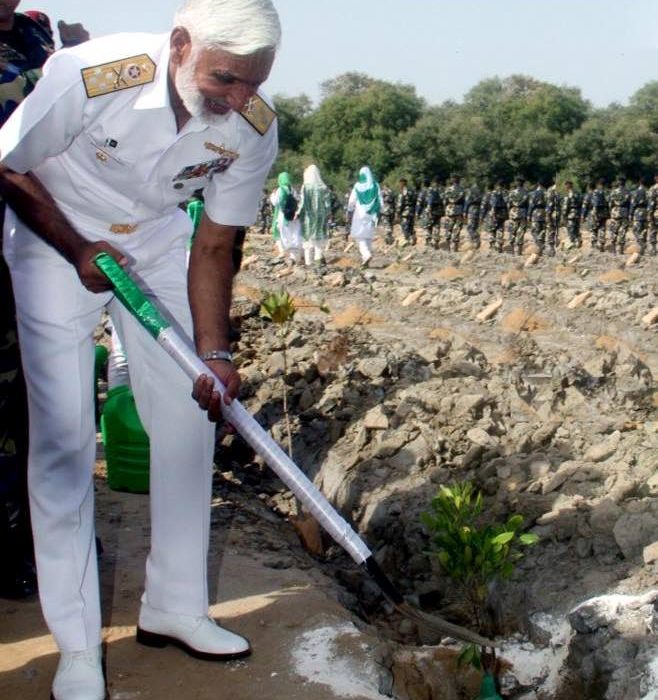 The program follows guidance from the Government of Pakistan regarding the need to restore coastal areas, both to boost fisheries and for national defense against increased storms and sea level rise from climate change. 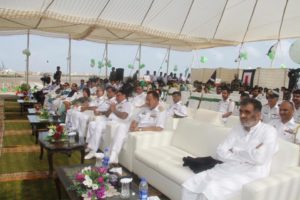 While speaking on the occasion, Chief of the Naval Staff highlighted that deforestation of mangroves has not only affected biodiversity of our coastal areas but also livelihoods of coastal communities. Admiral Zakaullah elaborated that these campaigns will not only increase the mangrove forest cover but will also play a key role in awareness of masses about the importance of these forests.

The Naval Chief emphasized all the relevant Federal, Provincial institutions and all sections of the society to join hands for this essential effort. Emphasizing the importance of mangroves, the Naval Chief announced that the name of the campaign be changed to National Campaign for Mangroves Plantation 2017.

While giving his message on Independence Day the Naval Chief said that Independence is a great virtue. He said, “Let us pledge that we will value it and we will perform our duties with complete honesty and we all will contribute in making this country greater.”

Mangroves are vital to coastal ecosystem, prevention of sea intrusion and sustainment of marine life. Unfortunately, over the years, mangroves along the Pakistani coast have diminished due to negligence and apathy of all concerned. Being a major stakeholder of the maritime domain and realizing the importance of mangroves for marine life, the Pakistan Navy has taken a major initiative to revive Mangrove forests all along the coast.

Realizing the importance of Mangroves forests in combating pollution, countering coastal erosion and providing a number of economic and financial opportunities to coastal communities, Pakistan Navy in line with the vision of the Federal Government regularly under takes Mangroves Plantation Campaigns.

Over one million mangroves saplings were planted last year with the collaboration of Forest Departments of Sindh and Balochistan, International Union for Conservation of Nature (IUCN) and World Wildlife Fund (WWF). Through these campaigns, not only more forests are raised but also the existing Mangroves forests can be conserved.

The inauguration ceremony was attended by a large number of senior military and civil officials including representatives from business community, journalists, World Wildlife Fund (WWF), International Union for Conservation of Nature (IUCN), officials from Federal and Provincial Forest Departments.