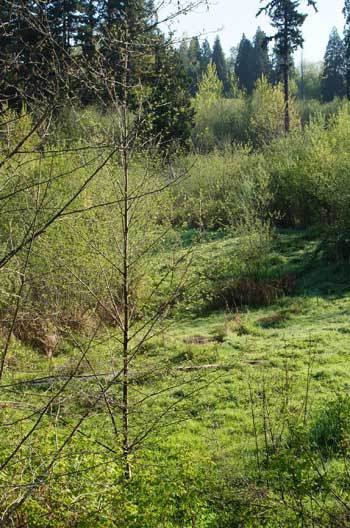 Imagine a wastewater treatment facility where people get married, amid 40-acres of restored salmon habitat with designed ponds and wetlands.

It sounds far-fetched but it’s reality in Snohomish County, Washington, near the border with King County, about an hour northeast from downtown Seattle.

In a tour of the Brightwater facility during the American Planning Association (APA) conference by Michael Popiwny, the landscape architect who managed this $1 billion project for the King County government, we learn how wastewater treatment plants can become assets instead of drains on communities and the environment. The key to success was an interdisciplinary management, design, and construction team that was highly responsive to community feedback and deeply sensitive to environmental concerns.

Plus, Brightwater was paid for by growth in the region. As new people are attracted to the quality of life the Seattle area offers, they move in and pay a $4,000 – $8,000 sewer hook-up fee. “The fact that new people were paying for the system helped us to sell it to the community.”

Brightwater, a 15-year endeavor that began operations in 2011, is a wastewater treatment facility, environmental education and community center, and ecological system rolled into one. It’s a 114-acre site, nestled in a wealthy residential area, with some 70 acres of trails and parks open to the public.

The process of restoring the habitat and turning into a publicly-accessible park was complex, involving stream and wetland biologists, who guided ecological decisions, and landscape architects with Hargreaves. The team used 15 different types of rocks to create two different stream corridors that empty into ponds where salmon rest on their uphill climb to the places where they spawn. “The result is something similar to the original stream.”

To restore the forested wetland, the Brightwater team made it an environmental education and community outreach project. Kids from the area helped plant over 20,000 native willows. “Native willows are easy for children to plant. We had about 4-6 busloads of kids from the surrounding area per week.” This effort really helped create community buy-in and grow a sense of greater investment in the success of the project.