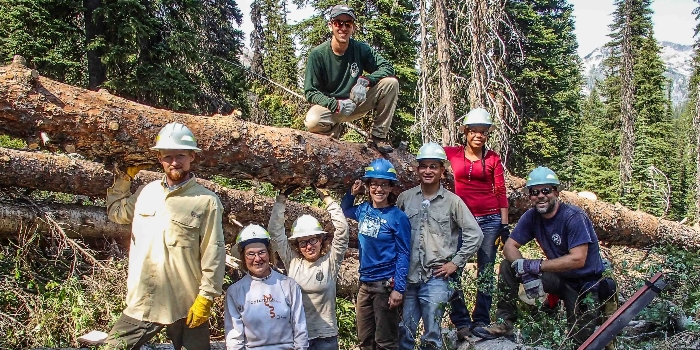 Ever wondered where those water drainages on the side of your favorite trail came from? Or how some areas have escaped the plague of invasive plant species that thrive everywhere else?

If so, you may be looking at the work of dedicated Sierra Club Outings volunteers.

Through the roughly 90 service trips we run each year, Sierra Club Outings donates roughly 27,000 work hours to state and federal land agencies. The monetary value? Around $405,000.

Sierra Club Outings does service through its group and chapters as well. With 65 chapters and more than 400 groups nationwide each contributing to local service projects, Group and Chapter Outings contribute an incalculable number of volunteer hours to our parks and public lands. Many groups and chapters devote special trips solely to service projects.

Besides the satisfaction of a job well done, service trip participants feel a sense of ownership of the area where they work. They often return year after year to the work site, either on a Sierra Club service trip or just on their own to see how the work they did is holding up.

Service trip participants get to meet the people who know the area best—namely forest service and park rangers. In some instances, we’ve been working with ranger districts and park service personnel for over a quarter century. Land agency representatives are happy to talk to us, and we are often granted access to areas off-limits to the casual visitor.

There is also a social aspect to service trips. Service trip participants often share a similar work ethic and similar beliefs about the land and about social responsibility. Friendships form, and it’s not unusual for groups to meet again on future service trips.