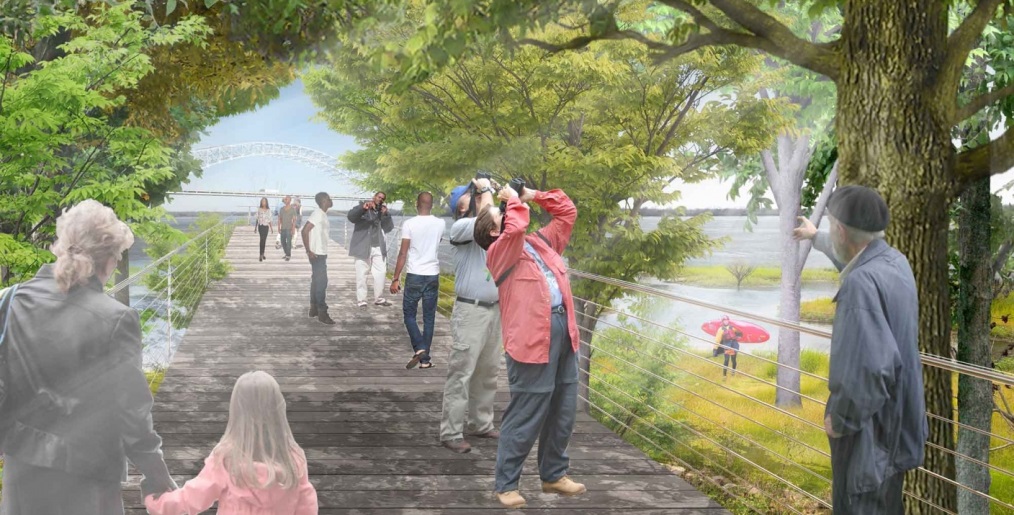 By the late 90s, the Memphis, Tennessee riverfront—once the cultural and economic hub of the Mid-South—was in desperate need of revitalization. A century of eastward expansion had estranged the people of Memphis from the energizing waters of the Mississippi.

As the new century approached, however, a cultural and economic rebirth in downtown Memphis ignited a fresh demand for places to play, relax and rejuvenate within the city’s urban core. It was at this time that the city’s leaders established a public/private partnership with a mission to connect the people of Memphis back to the Mississippi River: the Riverfront Development Corporation (RDC). 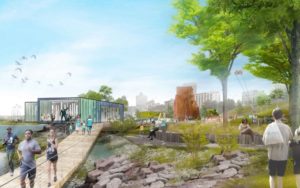 Since then, Memphis’ riverfront has roared back to life. Today, the riverfront is being used by residents and tourists in ways that it hasn’t since the days of the steamboat.

Pedestrian walkways, the revitalization and creation of new green spaces, public art projects, the construction of a world-class docking facility, and countless other enhancements have helped to, once again, make the water’s edge the heart and soul of the city and a world-class destination.

Now, on July 18, 2017, Chicago-based architecture and urban design firm Studio Gang presented its concept for the revitalized future of the Memphis riverfront.

Shaped by more than 4,500 survey responses from Memphians and multiple public events, the concept offers transformational ideas for six miles and five distinct zones of this historic and culturally significant part of the city.

“The concept offers a series of actionable ideas meant to help the Riverfront achieve its potential as a shared, connected civic space for all Memphians to enjoy,” said Gia Biagi, principal of urbanism and civic impact at Studio Gang. 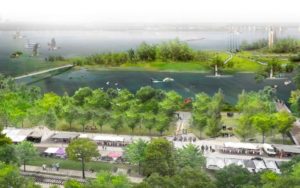 Studio Gang based its concept on multiple site visits, a wide range of interviews and meetings with stakeholders, surveys with some 4,500 respondents, and a study of previous planning exercises for the riverfront.

Studio Gang’s work in Memphis was commissioned for the Mayor’s Riverfront Task Force by the Riverfront Development Corporation (RDC), with the generous support of the Hyde Family Foundation and the Kresge Foundation. Mayor Jim Strickland and Mayor’s Riverfront Task Force members will now evaluate the concept, seek additional public consultation, and determine which ideas are best for Memphis and feasible to execute.

“We asked Studio Gang to think big about the future of our riverfront, and this concept proves they did exactly that. This visionary work will be the starting point of a community conversation to create a plan,” Mayor Strickland said. 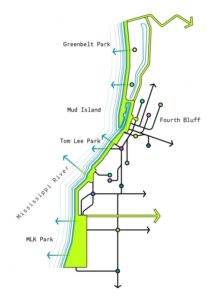 “The riverfront is a great opportunity for a transformational public-private partnership between business, government and philanthropy—much like the one that created Shelby Farms Park. With that kind of partnership, we’ll continue to uphold my commitment to not using city general fund dollars that we prioritize for public safety and strong neighborhoods. I’m thankful that RDC, the Hyde Family Foundation and the Kresge Foundation have already stepped up,” he continued.

Studio Gang’s Memphis Riverfront Concept describes how six miles of the city’s Mississippi riverfront can become a signature network of spaces and opportunities, tied into the city and its assets, that benefits the entire community and lifts Memphis as a whole. 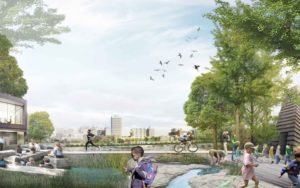 Many of the Concept’s proposed uses, from an iconic adventure playground to a special outlook where people can listen to live music at sunset, come directly from community members’ suggestions.

Together, they offer something at all times of day and year—building on the dynamic rhythms of Memphis and the Mississippi to increase the riverfront’s use, vibrancy, and economic potential.

These multi-phased approach presented by Studio Gang can be built over time, according to available funding and interest. Altogether, the design demonstrates how a renewed Memphis Riverfront can not only be inclusive and inspiring, but actionable and realistic as well.

All renderings courtesy of Studio Gang.