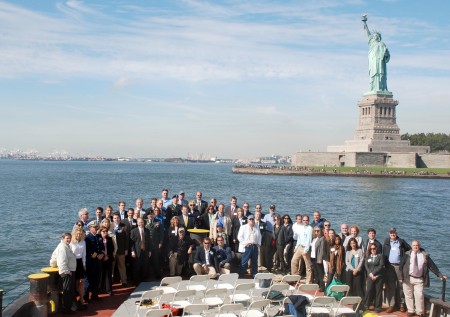 Speaking to a group of waterfront leaders, including congressional representatives and other key-decision makers from over 20 organizations, Colonel John R. Boulé II, the Army Corps’ New York District Commander, said “Years of industrialization have considerably degraded the Hudson River that’s part of the New York – New Jersey Harbor Estuary” he informed the guests who were taking in the New York City skyline and steady harbor breeze.

The Army Corps’ is presently helping to turn back the hands of time on the estuary. The agency hosted this event to celebrate the unveiling of an innovative comprehensive restoration plan created in collaboration with various partners with a joint focus on restoring the estuary.

Restoring the estuary will not only create a healthier environment for fish and wildlife, but it will also provide the public cleaner waters, healthier fisheries, increased flood protection, recreational opportunities, and a boost to the region’s economy.

“The primary goal of the New York-New Jersey Harbor Estuary Comprehensive Restoration Plan is to develop a mosaic of habitats that provides maximum ecological and societal benefits to the region,” said Lisa Baron, project manager, and marine biologist with the U.S. Army Corps,’ New York District.

Baron along with a diverse group of technical experts and consultants with the Army Corps’ New York District developed the plan as part of the Hudson Raritan Estuary Ecosystem Restoration Study with The Port Authority of New York and New Jersey, the project’s local sponsor.

The plan was prepared in collaboration with the New York-New Jersey Harbor Estuary Program and more than sixty partnering organizations, including federal, state and local agencies, non-governmental organizations and regional stakeholders.

The New York-New Jersey Harbor Estuary Comprehensive Restoration Plan was launched to become the blueprint for the region to move estuary restoration forward in the future.

“The team is already achieving the plan’s restoration goals,” said Peter Weppler, Chief of the Army Corps’ New York District Coastal Ecosystem Section. “Salt marshes are being created within some of the estuary’s regional areas. This is tangible evidence towards fulfilling our vision of a restored estuary.”

Note from Storm: In his above-mentioned speech, Colonel Boulé somehow forgot to mention the Corps of Engineers’ role in that degradation. That said, it’s great to see that, over the past 20 years, restoring their 200-year legacy of ecological damage has become the fastest-growing activity at the Corps. This 2009 article describes the launch of what seems to have been a great program. If any REVITALIZATION readers in the Hudson Valley would care to bring us up to date on the current state of this effort, please do so in the Comments section below.