Sydney is a former city on the island of Cape Breton in Nova Scotia, Canada. Sydney was founded in 1785 by the British, and incorporated as a city in 1904. But it was dissolved on August 1, 1995, when it was amalgamated into the Cape Breton Regional Municipality. Sydney served as the Cape Breton Island colony’s capital until 1820, when the colony merged with Nova Scotia and the capital was moved to Halifax. 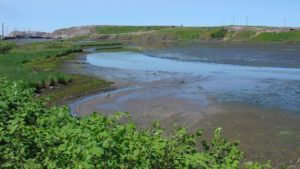 Sydney Tar Ponds in 2005.Photo by David Smith via Wikipedia.

A rapid population expansion occurred just after the turn of the 20th century, when Sydney was home to one of North America’s main steel mills, the Sydney Steel Corporation (SYSCO). SYSCO turned the local estuary into one of the most notorious hazardous waste sites in Canadian history, nicknamed the Sydney Tar Ponds.

After extensive public consultation and technical studies, a C$400 million cleanup plan, jointly funded by the Government of Canada and Government of Nova Scotia, was announced in January 2007. The cleanup was completed in 2013 with the opening of Open Hearth Park which is situated on the site of the former steel plant and has hosted events such as an Aerosmith concert in September 2014.

The city’s population steadily decreased since the early 1970s due to the steel plant’s declining fortunes, and SYSCO was finally closed in 2001. Today, the main local industries are tourism and customer support call centers. 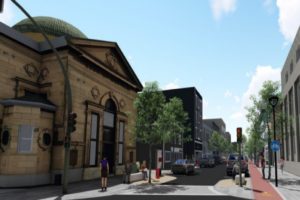 Now, Cape Breton Regional Municipality councillors have endorsed in principle a plan to revitalize downtown Sydney that will require $10.5 million in investments for the area.

In the case of Sydney, the target would be 300 new residential units in the downtown area.

LeBlanc said the plan really focused on Charlotte Street, particularly making it friendlier to pedestrians and trying to reconnect the waterfront to the downtown.

Photo of Sydney by Abebenjoe via Wikipedia.