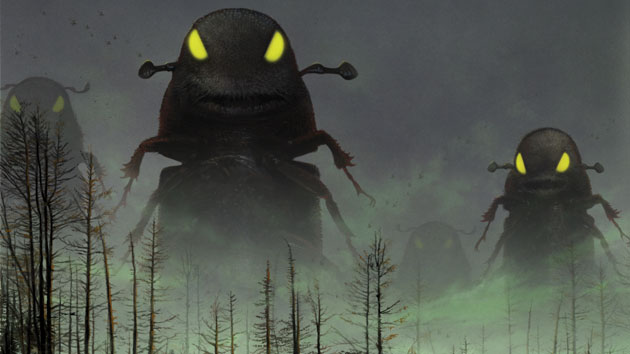 Mountain pine, spruce, piñon ips, and other kinds of bark beetles have chomped 46 million of the country’s 850 million acres of forested land, from the Yukon down the spine of the Rocky Mountains all the way to Mexico. Yellowstone’s grizzly bears have run out of pinecones to eat because of the beetles. Skiers and backpackers have watched their brushy green playgrounds fade as trees fall down, sometimes at a rate of 100,000 trunks a day. Real estate agents have seen home prices plummet from “viewshed contamination” in areas ransacked by the bugs.

And the devastation isn’t likely to let up anytime soon. As climate change warms the North American woods, we can expect these bugs to continue to proliferate and thrive in higher elevations—meaning more beetles in the coming century, preying on bigger chunks of the country.

The bill sought to designate “Revenue Areas” in every national forest where, to help address insect infestations, loggers would be required to clear a certain number of trees every year. Loggers could gain access to roadless areas, wilderness study areas, and other conservation sites, and once designated, their acreage could never be reduced. The zones would also be excluded from the standard environmental-review process.

Six and other scientists vehemently opposed these massive timber harvests—as did environmental advocates like the Sierra Club and Defenders of Wildlife, the latter warning that the harvests would take logging to “unprecedented and unsustainable levels.” The bill passed the House but died in the Senate last year. But Daines, now a senator and one of 2014’s top 10 recipients of timber money, vows to renew the effort so as to “revitalize Montana’s timber industry” and “protect the environment for future generations.”

Last year, entomologist Diana Six and University of California-Berkeley law professor Eric Biber, published a provocative review paper in the journal Forests that challenged the Forest Service’s beetle-busting strategies. After scrutinizing every study about beetle control that they could get their hands on, they concluded that “even after millions of dollars and massive efforts, suppression…has never effectively been achieved, and, at best, the rate of mortality of trees was reduced only marginally.”

Six points to a stand of lodgepoles in the University of Montana‘s Lubrecht Experimental Forest. In the early 2000s, school foresters preened the trees, spacing them out at even distances, and hung signs to note how this would prevent beetle outbreaks.

This “prethinned” block was “the pride and joy of the experimental forest,” Six remembers. But that stand was the first to get hit by encroaching pine beetles, which took out every last tree. She approached the university forest managers. “I said, ‘Boy, you need to document that,‘” Six says. “They didn’t. They just cut it down. Now there’s just a field of stumps.”

For the timber industry and its friends, beetle invasions have been a handy excuse to open wild areas for logging.

Six and Biber’s paper came as a direct affront to some Forest Service researchers, one of whom told me that he believes changing forest structure through thinning is the only long-term solution to the pine bark beetle problem. Politicians tend to agree—and beetle suppression sometimes serves as a convenient excuse: “It is perhaps no accident that the beetle treatments most aggressively pushed for in the political landscape allow for logging activities that provide revenue and jobs for the commercial timber industry,” Six and Biber wrote in the Forests review.