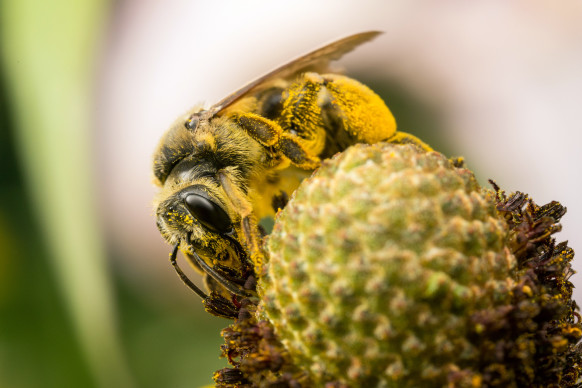 Note from Storm: I’ve written about the importance of restoring native pollinators in both of my earlier books, The Restoration Economy (Berrett-Koehler, 2002) and Rewealth (McGraw-Hill Professional, 2008). This Wired magazine article does a great job of reminding us in the U.S. that the non-native European honeybees that all the environmental groups seem to be frantic about are not endangered. Nor do they perform the essential ecosystem functions that native bees do.

“SAVE THE BEES!” is a common refrain these days, and it’s great to see people interested in the little animals critical for our food supply around the globe. But I have one quibble: you’re talking about the wrong bees.

Honey bees will be fine. They are a globally distributed, domesticated animal. Apis mellifera will not go extinct, and the species is not remotely threatened with extinction. The National Survey of beekeepers released last week reported the lowest winter hive losses of the last 8 years.

The bees you should be concerned about are the 3,999 other bee species living in North America, most of which are solitary, stingless, ground-nesting bees you’ve never heard of. Incredible losses in native bee diversity are already happening. 50 percent of Midwestern native bee species disappeared from their historic ranges in the last 100 years. Four of our bumblebee species declined 96 percent in the last 20 years, and three species are believed to already be extinct.