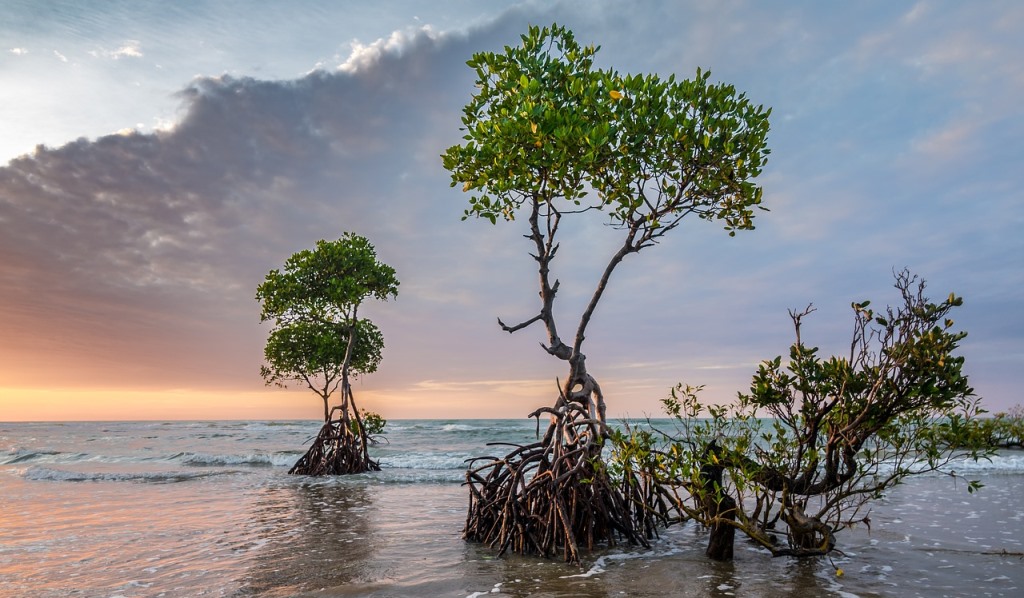 By the end of the century, the report’s authors wrote, more of the world’s seas could be hot, acidic and lifeless — with catastrophic implications for marine life, the climate and for the food security of billions of people.

But as grave as the report’s findings were, experts say, there is reason for hope.

Through ambitious alliances and innovative engineering, conservationists are working tirelessly in 2020 to prevent the UN’s stark warning from becoming reality. Here are three approaches that Conservation International scientists are pioneering to conserve the oceans on a global scale.

Limb for limb, the mangrove is perhaps the most important tree species on Earth.

Around the globe, mangroves provide an estimated US$ 82 billion in flood risk prevention annually for coastal communities and store up to 10 times more carbon per unit area than terrestrial forests — yet nearly half of the world’s mangrove forests have been lost in the past 50 years.

To conserve these carbon powerhouses and the communities they protect from the imminent threats of climate change, Conservation International experts are working to combine mangrove restoration efforts with conventional engineering approaches through a technique called “green-gray” infrastructure.

“Green-gray infrastructure can help strengthen a community’s protection against extreme floods, storms and rapid sea-level rise; provide crucial benefits such as fresh water and fisheries; and remove carbon from the atmosphere — it’s a win-win-win,” she added.

In 2020, Conservation International will work closely with local governments and communities in the central Philippines — a region still recovering from a devastating typhoon in 2013 — to expand on initial pilot projects to increase their resilience to the impacts of climate change through green-gray initiatives. Examples of these projects include the construction of breakwaters — barriers to protect a coast from storms and flooding — along with extensive mangrove forest restoration.

To drive funding to these projects, Conservation International is now tapping into an unlikely resource: the insurance market.

“Mangroves can help protect people, their homes and their assets from storm surges and flooding,” Howard said. “Insurance companies are starting to realize that protecting coastal wetlands is a profitable investment.”

By creating the Restoration Insurance Service Company (RISCO) for Coastal Risk Reduction, Conservation International will work with insurance companies to incorporate the value of mangroves into insurance products through fees and carbon credits that support community-based wetland restoration and conservation efforts.

A planned RISCO pilot in 2020 in the Philippines will conserve and restore 4,000 hectares (9,884 acres) of mangroves. Over the next decade, this project could protect highly vulnerable communities, critical infrastructure and provide a climate benefit of more than 600,000 tons of avoided and sequestered emissions — equivalent to taking more than 127,000 cars off the road for a year.

“We need to test out new ideas and partnerships to scale up the protection of coastal ecosystems,” Howard said. “This project will show that these initiatives can be replicated all over the world to have an even larger impact.”

Three out of seven people worldwide rely on seafood as their primary source of protein — and more than half of all seafood comes from aquaculture (also known as fish farming).

Yet aquaculture can have massive environmental impacts if practiced unsustainably. In such cases, coastal forests are typically the first casualty, cut down for fish farms to expand. The second casualty: the fish themselves, wiped out by disease made worse by pollution of the water.

“Shrimp is one of the most produced commodities in aquaculture, and it is also one of the most unsustainable,” said Dane Klinger, Conservation International’s aquaculture innovation fellow. “We must work toward developing new ways to intensify shrimp production through aquaculture while shrinking its environmental footprint.”

In 2018, Conservation International worked with a range of NGOs and scientists to help develop a series of guidelines for farmers and regulators to limit the impact of shrimp aquaculture through improved water management, farmer communication and governance.

With these guidelines in place, Conservation International is piloting a new approach in 2020 in East Java, Indonesia, convening all the players in that region’s shrimp-farming sector — governments, companies, seafood traders and the farmers themselves — in an audacious effort to revolutionize the entire process and avoid the ruinous boom-and-bust cycle of disease that drives harmful environmental impacts such as deforestation.

Through this approach, farmers are gaining access to improved technology and training, enabling them to better manage water quality and shrimp health in their ponds. Groups of farmers, companies and regulators have begun working together to coordinate disease management across the entire region, acknowledging that disease on one farm presents a risk to all of the farms in the area.

With fish farming projected to double by 2050, these efforts could be the first step toward transforming aquaculture across the globe, Klinger explained.

“For this approach to work, we have to engage every stakeholder across the aquaculture industry at a massive scale. Humanity needs to get aquaculture right,” he added.

As climate breakdown accelerates, warming waters and ocean acidification are causing marine species to move toward different regions of the ocean.

To protect these species, scientists are working to adapt one of the most effective tools in ocean conservation: marine protected areas (MPAs) — regions of the ocean where human activities such as commercial fishing are limited to support conservation.

Published in 2019, a report by Conservation International scientists outlines eight guidelines for countries to create a global network of MPAs that can actively respond to the impacts of the climate crisis.

“The report emphasizes the need for new tools that are constantly updating fishers as marine species move,” said Lee Hannah, senior scientist for climate change biology at Conservation International and co-author of the study. “It’s not just Nemo and Dory that are riding shifting currents,” he said, referring to the popular Disney characters, “it’s the entire marine food chain.”

Additional guidelines listed in the report range from creating a global database of new ocean management techniques to ensuring that all MPAs are climate-resilient through adequate staffing and funding.

“We have a foundation of research supporting the development of climate-smart MPAs,” said Dr. Emily Pidgeon, vice president of ocean science and innovation at Conservation International. “Now it is time to implement this science at a planetary scale.”

Along with adapting to the unavoidable impacts of the changing climate, adapting and expanding MPAs could also be critical to ending the climate crisis, Pidgeon explained.

“The changing climate is tied directly to how humans are managing and treating the ocean,” Pidgeon said. “Both the fires that recently burned through Australia and the floods in East Africa can be connected to the ocean because oceans control climate. The world’s oceans are the engine of climate change — and consequently protecting the oceans must be central to any climate solution.”

Photo of mangroves by Pat Josse from Pixabay.