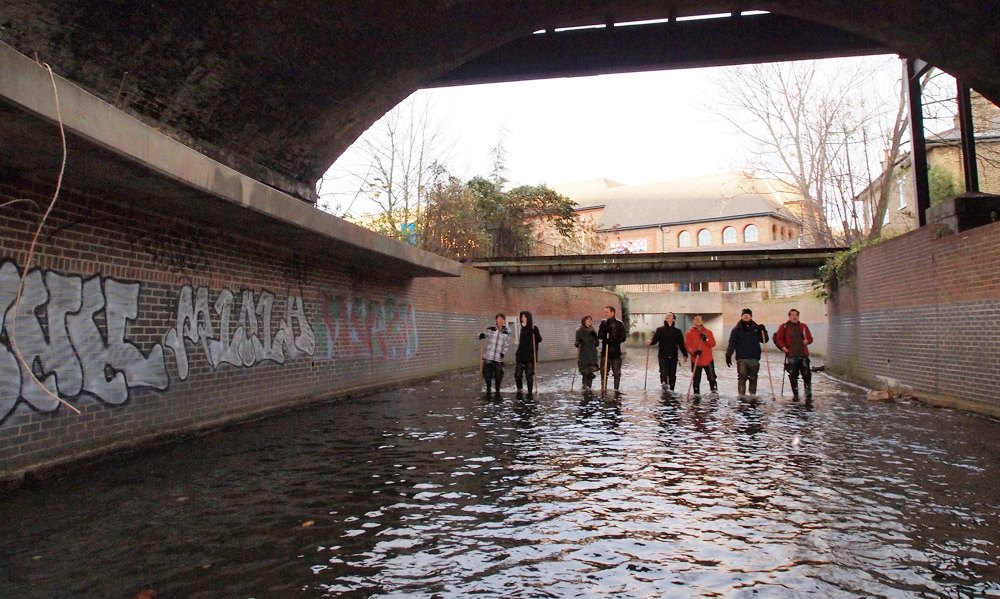 This article was originally published by NPQ online, on March 3, 2020, at https://nonprofitquarterly.org/restoring-our-hidden-rivers-revisiting-urban-waterways-with-new-eyes. Used with permission.

Sometimes, if you listen closely, you can hear the creeks running in storm drains under our feet. Occasionally, you can even see them.

Many of our world’s modern urban rivers are hidden, a place apart. They are forgotten spaces and, given their anonymity, they sometimes coexist unknown and protected. More commonly, they are abused, polluted, and compromised due to a lack of love and stewardship. Often, they hide in pipes under parking lots, streets, and highways.

Urban rivers that have been forgotten or buried underground for years often wind their way through neighborhoods that also have been forgotten, marginalized, or intentionally burdened with infrastructure like landfills, power plants, and sports arenas that damage the quality of life for residents.

For example, in and around the busiest airport in the world, Atlanta’s Hartsfield-Jackson International, the Flint River can be found running through pipes under parking lots and runways. Many of the neighborhoods that once stood there, and the people who once called those neighborhoods home, are long gone, bought out in favor of airport expansion.

Until we can address both the marginalization of rivers and of their neighbors, it will be impossible to create thriving communities with healthy rivers and clean water for all. Healthy rivers and communities share similar attributes, including diversity, interconnection, productivity, and resilience. And the health and vitality of both are intertwined.

When streets flood with polluted stormwater and sewage spills into basements and backyards, community and river health are at risk. Why? Because our sewers carry everything that’s gone “down the drain,” including human waste, household chemicals, and pharmaceuticals—which can harm human and ecological health. Untreated human sewage alone can contain infectious diseases such as salmonella, hepatitis, dysentery, and cryptosporidium. Likewise, sewage can cause algal blooms in rivers, destroying habitat for fish and other aquatic organisms.

The problem is compounded when wastewater sewers are coupled with storm sewers. These “combined sewers,” which the US Environmental Protection Agency reports are in operation in 860 cities serving 40 million people, also end up carrying pesticides, fertilizers, automotive chemicals, and trash that rain washes off the streets. Moreover, the sheer volume of stormwater can quickly overwhelm these aging and undersized pipes, resulting in this toxic cocktail backing up into basements, spilling into streets and parks, and pouring into rivers and streams.

All told, while precise determination of the cause of waterborne illness is often not possible, researchers conservatively estimate that sewer overflows sicken thousands of Americans each year.

The remedy: equitable urban river restoration, which recognizes the value of both the people and the river—and connects them together for impact.

In my experience, there are four critical components needed to successfully move an equitable urban river restoration forward:

Discovery is the active uncovering of something lost, unknown, or simply hidden from sight, invisible. Discovery connects people to the river, creating opportunities for deeper connection. Sometimes that connection happens through a creek-finding walk, cleanup, or, if possible, a paddle trip.

The focus of the Finding the Flint project, as the name implies, is exactly this—encouraging, inspiring, and enabling people to connect with the Flint River around and under Atlanta’s airport. Connecting in this case happens by taking a bike tour, testing water quality, or walking the headwaters. It even involves looking down storm drains in parking lots.

Discovery is also an unpacking of the history of the river and the community. Understanding the reasons why the river in this community looks different from the river upstream or in other neighborhoods is critical in piecing together the way forward.

It is important to consider the history of systemic racism that built the city and the neighborhood, the systematic racial injustices that perpetuate marginalization, including the devaluing of the neighborhood, the people, and the river. When the young people at Youth Ministries for Peace and Justice (YMPJ) saw their Bronx River in the South Bronx and then visited the same river further north in the whiter and more affluent Westchester area, they rightly asked the question, why? Why is the river so polluted and blocked off in our section, when it is beautiful and accessible elsewhere?

Once the river, the community, and their shared history are known, the next opportunity is to engage imaginations around the possibility for transformation. It is challenging to imagine that the river or the community can be anything other than what it already is. It is in this step that partners are invited to envision, to dream, and ultimately, to plan for a different future.

The grant also funded an ecologist with New York City Parks’ Natural Resources Group to make a site visit. Gazing out on an apocalyptic-looking scene with burned trees, dumped cars, and thousands of tires lining the banks of a derelict concrete plant, he was asked to consider partnering with YMPJ youth to restore the area to a healthy ecosystem and help create a park. While daunting, he was inspired by the vision and excited by the potential for transformation.

To engage and sustain involvement of a critical mass of stakeholders, people need to believe that change is possible and achievable for their community. This is a heavy lift in low-income neighborhoods and neighborhoods of color where many promises have been made and few kept, and where positive changes in keeping with a community-sourced vision are often rare or non-existent.

Implementing successful, tangible projects connected to community and other stakeholder priorities is the third step. This means first identifying and communicating community priorities. In the case of Intrenchment Creek in Atlanta, the Turner Field Community Benefits Coalition conducted a survey of over 1,000 households to find out what they wanted to see as part of a neighborhood redevelopment project and determined that the top priorities for the community included addressing flooding and combined sewer overflows and getting a grocery store in the neighborhood.

These recommendations were codified in the Stadium Neighborhoods Livable Centers Initiative and are now being implemented through the Intrenchment Creek One Water Management Task Force, convened by American Rivers, ECO-Action, the city’s department of watershed management, and Carter, the project developer.

With this step, it is important to demonstrate that the community can meet its goals while restoring the river. In most cases it means securing resources to make the changes envisioned. In the Bronx, for example, YMPJ prioritized the concrete plant site for public access to the river.

YMPJ then partnered with Natural Resources Group—the ecologist mentioned above—and, with a grant from the National Oceanographic Atmospheric Administration, created a makeshift nursery to grow Spartina and other native plant species that they planted in the river together. This project transformed an abandoned lot as well as the river itself and provided inspiration and momentum to build on.

Lastly, it is critical that a sustainable constituency with community leadership and shared decision-making is in place to implement the long-game work of restoring a river and transforming a community. In most cases, the degradation and marginalization of urban rivers and their neighborhoods took generations.

This means that it will take some time to create thriving, healthy rivers and communities again. To sustain the work in the long run, it is essential that a dedicated and organized group of stakeholders commit to implementation of the vision, projects, policies, and processes needed to make the envisioned changes.

The Bronx River Alliance (Alliance) offers an inspiring example. The Alliance was created to address four programmatic areas: ecological restoration, greenway development, education, and outreach. Committees focused on each of these areas are open to community members and other partners’ groups and agencies. The committees select their leadership and those leaders then become members of the Alliance’s board of directors. In this way, there is a codified path for community members to be part of the board on an ongoing basis. Rather than the board being separate and self-perpetuating, it must respond to and engage with the perspectives brought from the community and the broader Bronx River constituency.

We have historically treated the community as separate from the watershed, from the river. We can’t do that anymore. Restoring an urban river can be daunting, particularly when the river is invisible or inaccessible. Until the fate of the river and the community are connected, we will not succeed in equitably restoring or transforming either. We must address both the marginalization of the river and the marginalization of the community in order to create thriving communities with healthy rivers and clean water for all.