In the Gorbals area about 20 miles west of Glasgow, Scotland lies a modern ruin. St Peter’s Seminary in Cardross was finished in 1966 but only operated in its intended role for 14 years. Built only 50 years ago, by the 1990s it was already derelict. 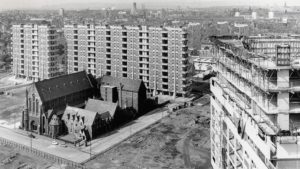 In the 36 years since its closure, it has fallen into disrepair, yet is generally regarded as one of the most important examples of Modernist architecture in Scotland.

Today, plans to breathe new life into the building are now close to being realized.

The concrete ghost is hidden in woods on the north side of the River Clyde – the shell of an ambitious 1960s modernist building which the Catholic Church had planned to use to train 100 novice priests. 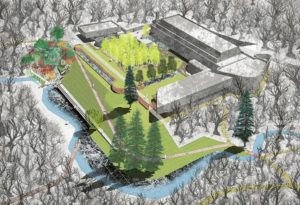 Artists’ rendering of redevelopment by ERZ.

That didn’t work out very well, thanks in large part to the tectonic shifts in public support for the priesthood in recent decades.

The building was originally designed by architects Isi Metzstein and Andy MacMillan at Gillespie, Kidd and Coia as a teaching college for priests, but closed in 1980. 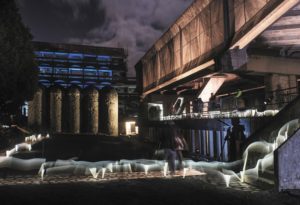 After its closure there were difficulties with upkeep and, although it was briefly repurposed as a drug rehabilitation center, it quickly fell victim to vandals and dilapidation.

Now on the occasion of its half-century, Historic Environment Scotland has published a volume telling its history.