The world’s iconic buildings achieve celebrated status because their architecture stands the test of time. But what lies beneath those enduring facades?

Design and engineering evolve quickly, and many urban buildings—nearly half the office space in New York City was built before 1945—predate concepts like sustainability, climate change, and even recycling, resulting in waste and inefficiency. 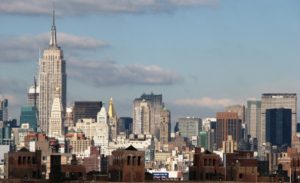 But most architects and planners already know that the greenest buildinga are the ones that are already built. This is because they embody—in both their structure in and the process of constructing them—vast amounts of energy and materials.

No matter how green and efficient a new building might be, if a substantial, reusable old building was demolished to make way for it, it will most likely never recoup what was lost.

I (Storm Cunningham) first realized this in the mid-90’s, when I attended what might have been the world’s first conference on the intersection of historic preservation and green building. It was titled “What’s So Green About Historic Preservation?“, and took place in the newly-built Women In Military Service For America Memorial at Arlington Cemetery in Arlington, Virginia, just across the Potomac River from Washington, DC. I was writing my first book, The Restoration Economy, at the time, so it was a hugely influential event for me.

Buildings consume 73 percent of the electricity in the U.S., and indirectly create 38 percent of carbon dioxide emissions—more than industry or transportation.

To win the climate restoration challange, cities will need to run on more efficient buildings.

These historic icons blazed a trail for other buildings to follow. The retrofitted iconic structures included in the National Geographic article linked-to below are:

Featured photo of the Sydney Opera House by Storm Cunningham.